“So I won’t have that beer, Webster, unless I’m drinking it from Jonah King’s skull.” That's kind of a paraphrase, but you get the point. Lines like that make me kind of love this movie. 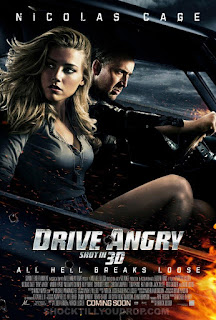 as no surprise that he would star in a film called Drive Angry 3-D. To be fair, Cage doesn’t go full Wicker Man in this one (unfortunately), but he does get to do some crazy things. Drive Angry is perfect for Cage because it doesn’t take itself seriously. It is pure fun from start to finish.
Drive Angry is this strange film that is filled with religious themes. For instance, Cage’s character is called Milton (as in the “Paradise Lost” Milton) and the movie lets on very quickly that this film takes place in world in which Hell definitely exists. There are run-ins with a cult and a mysterious man, known only as The Accountant (William Fichtner), is certainly not a number cruncher. The film doesn’t get too deep into religious philosophies, though, and that’s a good thing. This isn’t a deep movie and shouldn’t be looked at too closely anyway. A film like Drive Angry is meant to be enjoyed with a smile not a contemplative furrowed brow.
The movie is about the mysterious Milton who is on a mission to retrieve his infant granddaughter from a cult. The cult murdered his daughter and plans on sacrificing the baby to open a portal to Hell. On top of that, the even more mysterious Accountant is mixing things up, seemingly playing both sides. A young lady, Piper (Amber Heard), is taken along for the ride. Absolute craziness and just plain weird stuff ensues.
This is the type of film that Cage has perfected as of late. Cage doesn’t get to scream like a maniac, though. His performance is that of a reserved psycho. He is still a lot of fun. (Skip to the next paragraph if you don’t want a single crazy detail about Cage spoiled.) Cage gets to deliver some killer lines like, “Let the girl go, give me the child, or I’ll blow all your heads off.” At one point, he gets beaten with the femur bone of his daughter for what seems like five minutes. Oh, and he drinks beer from a human skull. I’ll type that again: Nicolas Cage drinks beer from a human skull. If that doesn’t pique your interest for this film then nothing will.
Nicolas Cage isn’t alone in the insanity in this one. William Fichtner is absolutely hilarious as the Accountant. He delivers his lines with such dead pan hilarity you can’t help but laugh. He plays the role with equal parts menace and child-like wonder. It makes for a very amusing performance. Billy Burke has a few great moments as cult leader Jonah King as well. And David Morse classes the joint up a bit with his scenes near the end.
Drive Angry isn’t just a crazy fest, though. It is primarily an action film…in 3-D. The action is decent for the most part, with a few standout moments. The CG is atrocious at times, but forgivable since some of the stunts are ambitious and brutal. The 3-D elements are just right for this type of film, though they aren’t vital to the overall experience. Director Patrick Lussier (the underrated Dracula 2000) knows how to use gimmicky 3-D. He also made the fun My Bloody Valentine remake a couple years ago and that film utilized 3-D in a very entertaining way.
This movie is basically made for men. It has plenty of classic muscle cars and a few entertaining driving sequences to go with them. There are plenty of beautiful ladies throughout. There’s even a sex scene during a shootout, which may make some cry foul because of its similarities to the scene from Shoot ‘Em Up, but I found it to be a more entertaining scene so it’s okay with me. And there is plenty of brutal action throughout the film. Add Nicolas Cage and a plot about Hell and cults and whatnot and you end up with a (screw it, pun intended) hell of a good time.
Drive Angry was criminally underseen last weekend, which is upsetting because it is such a fun film. Maybe Cage isn’t as entertaining to general public as he is to this critic. Maybe the 3-D is element has burned audiences out. Who knows? But if you just wrote this one off after you saw Cage’s name and “3-D” in the title, you should reconsider and give it a chance. Though at this point, it’s most likely the film is disappearing from theatres at a rapid rate. So, give this a try on video because it is quite literally crazy fun.
Random Thoughts (SPOILERS)

What was with the dude in the church with the terrible wig? The guy is even credited on IMDb as "Man in Wig." I was expecting a joke to come up about it, but it never did. It was just odd...which is okay.

They made a big point to declare that this was "Shot in 3-D." I'm a fan of this and I hope other movies do this in the future. If I'm spending an extra $3 for a movie in 3-D I'd rather the film was shot in 3-D. But since this film made almost nothing, it's not likely to influence future marketing campaigns...

The femur bone stuff cracked me up. Jonah King is a harsh bastard. Killing the girl is not enough, he has to fashion a cane handle out of her femur bone then beat her father with it. Wow.