Bring on the aliens, the Evil Kurgan shall smite them all!

When aliens show up on Earth, it is rarely peaceful. There’s a 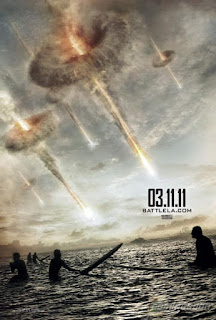 reason for that, of course: peaceful aliens are lame (sorry, E.T.). It also makes sense that aliens would be hostile towards us. Isn’t the entire point of NASA these days to find a planet that can sustain human life? What would we do if we went there and it was occupied by (compared to our species) strange creatures? Something tells me we wouldn’t wave a white flag if we needed that planet to survive. Maybe I’m wrong, but regardless, it does make more sense for an alien race to be hostile towards humanity…and the latest, albeit unoriginal, film version of that scenario is Battle: Los Angeles.

Battle: LA is truly a movie about a battle taking place in Los Angeles. The film actually scales back from the usual alien attack movie by placing the majority of the action away from the major destruction. The focus is on a small group of Marines on a civilian extraction mission. It’s not about fighter jets taking on mother ships or anything like that. Battle: LA does contain its grander moments, sure, but the majority of the film takes place in side streets with intense urban warfare.

The small group of soldiers is led by Nantz (Aaron Eckhart) a staff sergeant near retirement who is dealing with the losses of his last deployment. He is accompanied by a typical group of soldiers. No one really stands out in the group because character development isn’t exactly priority number one in a movie like this. But enough information is given about the characters that it is easy to get on their side, but that might just be because they are fighting a group of disgusting aliens.

The alien design is definitely a highlight of Battle: Los Angeles and, if anything, the film didn’t show off the creatures enough. The lack of gruesome close-ups or showy sequences adds to the mystery of the aliens, but a little more information would have been nice.

Battle: LA isn’t a creature feature, though, it is an action film. For the most part, the action is entertaining. Everything is good and loud, just like a war movie should be. The effects look fine and there are a few brutal moments to keep the action junkies sated. Some may take issue with the “shaky-cam” stuff, though. This isn’t one of those fake documentary movies or anything, but the camera is handheld and it does get chaotic at times. It works as a tool to show a hectic battle, but it isn’t really necessary for a conversation, yet it is used for both, which is unfortunate.

If Battle: LA has any faults, they occur when there is even a remote attempt at emotion. Everything is clichéd. The young soldier with the pregnant wife at home; the soldier struggling with the death of a loved one; and there’s even a little kid thrown into the mix who gets to salute like a good “little Marine.” There’s nothing really wrong with it, but it just came off as forced and a bit cheesy.

All of that is forgiven thanks to some steely military resolve. Most of that praise belongs to Aaron Eckhart. He doesn’t have much to do in this except look very determined, and he has the glare and strong jaw line to do just that. He represents the ultimate determined soldier who will never give up. That is the saving grace of this movie. A movie like this is about survival, not just of the main characters, but of the human race. These soldiers are all the audience gets to see of the human race and they will not quit for anything. They don’t need rest or food, just more ammo and more aliens to kill, which is awesome.

Battle: Los Angeles may seem like a video game to some (I was reminded of the “Resistance” series on PS3), but that is not necessarily a bad thing. That really just means the film is entertaining, but maybe a bit shallow. It’s an alien invasion movie, though, and all it needs is good action and characters that you don’t hate. Battle: LA has that and then some. There’s nothing really new here, but it is fun and it is certainly worth a watch.

The alien design was interesting, what with the tentacle and faceless quality of the critters. I wished there was more attention paid to the weird, hovering creatures.

This movie seemed realistic…if that makes sense. The aliens weren't ridiculous in their power and there wasn't some miracle solution that saved the day in the end. In the end, it was good old American fortitude that won through. (Cue Team America theme.)

The focus on water was interesting because that is exactly what NASA is all about these days. We're always looking for water and that is what these aliens are here for...allegory?

Speaking of allegory, what about the drones? That seemed like such a pivotal moment in the film. Eckhart gets his hero scene only to find an unmanned drone...which is exactly what our military uses today. If this film were a bit deeper I would think that the whole film is a commentary on American warfare, but it isn't because it completely celebrates America at every turn. Anyway, there might be something there, but it's still just some fun action for the most part.

Improvised alien autopsy…I like it! If there is a scene that makes the movie for me, it is the autopsy scene. I wish there was more of this in the movie. Such a crazy scene as Eckhart and Moynahan sift through the gore to try and figure out what exactly kills the aliens.

Finally, I wish the last act would have been Eckhart on his own…partially because I hate Michelle Rodriguez so much. She definitely is a toned down version of here usual bad-ass self, but she still gets on my nerves. Anyway, how bad-ass would it have been if the last twenty minutes was Eckhart on a suicide mission to take out the control center? I think I might have flat out loved this movie if it had ended like that. As it stands, I dug it, but it didn't blow me away or anything.
Posted by Eric Harris at 10:31 PM