Just wacky and entertaining enough to get in the Evil Kurgan's good graces.

You know that statistic about how humans only use a small 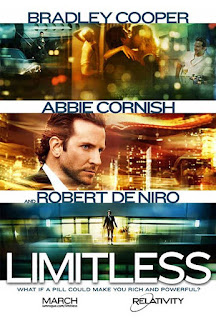 percentage of our brains? Limitless tries to show what it would be like if we were firing on all cylinders all the time. (By the way, if you want to look into some facts of the small percentage claim, check out this article.) What ends up on the screen is an often entertaining, though ultimately dumb movie.
Limitless is about Eddie Morra (Bradley Cooper), an aspiring writer who has hit a wall in his life. Eddie can’t even write the first word of his novel, he is often drunk by mid-afternoon, and his girlfriend has dumped him. Things start to change when a chance encounter leaves him with a prototype pill that allows him to use 100% of his brain. So Eddie decides the most important thing to do with his newfound genius-level intelligence is make as much money as possible and where else do you go to do that other than Wall Street? In fact, the simplest way to describe this movie (and I hate these comparisons, but I can’t help it) is Wall Street meets Charly/Flowers for Algernon.
The concept, that a drug can make you super-smart but leave you addicted, is interesting from a filmmaking perspective. The film only feels convoluted and messy when the withdrawal kicks in. It is streamlined and entertaining when Eddie is on the drug. This doesn’t excuse the problems of the film, but it makes you look at them a bit differently and that’s something.
Limitless starts to show some visual flair in the segments that are meant to convey what it’s like to be on the miracle drug. Director Neil Burger employs plenty of lengthy zooms that go through endless landscapes. The scenes are a little disorienting, but they are interesting to look at. Some of the images end up making the “clarity” of a fully functioning brain seem more confusing than eye-opening. But some images work, like the multiple Eddies, which show that taking the pill is basically like having copies of yourself to get all of your work done.
This is where Limitless gets a bit strange; it’s a drug movie, but it doesn’t seem to have a message. There’s nothing wrong with that, but if you stop and think about what this film is saying, you may end up scratching your head a bit. This isn’t meant to be a message film, though. The film doesn’t get deadly serious very often, and that’s a good thing. Limitless is mainly here to entertain.
Limitless is a fun watch. The montages loosen the film up nicely as we see Eddie just winning (to quote Wall Street star Charlie Sheen) at life. Getting ladies, jetting around the world, spending all his newfound cash; these scenes are clichéd (the suit buying scenes and stuff like that has a definite Wall Street montage feel to it) but amusing. Much of that is thanks to Bradley Cooper.
Cooper holds the film together. He’s in his wheelhouse with this one. Cooper gets to play his Hangover character when he’s in withdrawal and he gets to be Face from The A-Team when he’s rocking and rolling. Obviously it’s nothing we haven’t seen before, but the guy has charisma on the screen and while his voiceover felt forced and largely pointless, it’s forgivable because of his presence.
The other part of the cast that draws the most attention is the inclusion of Robert De Niro as a Gordon Gekko type during the Wall Street portion of the film. He doesn’t have much to do here except give Eddie warnings that go unheeded. He does a good job of looking upset and condescending, but that doesn’t make a character very interesting.
The Wall Street character wasn’t very interesting and that segment of the film in general drags a bit. There are all of those entertaining montages when Eddie first starts out only to lead to him…analyzing stock market trends. It’s during a segment like that when you start to question the movie and Limitless doesn’t hold up too well under a microscope. I’ll avoid spoilers (definitely check the spoiler section at the end if you’ve seen the movie), but just know that Limitless does answer most questions, it’s just that those answers are either too easy and/or kind of silly.
Once again, though, Limitless isn’t trying to be a profound experience. It’s mostly fun, a little dumb at times, but it’s mostly interesting. The concept, along with the star, keeps the film going. The film isn’t likely to have a lasting effect on anyone, but it is decent as passing entertainment and sometimes that’s good enough for the price of a ticket.
Random Thoughts (SPOILERS)

So what’s up? Did he kill that woman? Why is he okay with not knowing? Does the drug also make you capable of committing murder without guilt? If so, that is not someone I want running the country. After doing some message board research, I found that someone claimed you see the stalker dude near that scene implying that he killed her…but I didn’t catch that. But they said the room was wiped clean. Why did the stalker kill a girl to pin it on Eddie, then wipe away any evidence that Eddie was there? What about the fact that a witness saw Eddie, but not the stalker? And if the stalker was there to do all of this, couldn’t he have captured Eddie? And speaking of that, this guy can plant a bug in Eddie’s apartment but he couldn’t find Eddie’s stash? Why bug his phone anyway? Like Eddie is going to call someone to tall them his secret hiding place.
How could this guy possibly end up in major politics? The knife in the Russian mobster’s stomach had to have had his prints all over it. How does the revelation that the previous owner was an arms dealer clear that problem up? The movie just asks you to assume a bit too much at times.
Completely random, but I have to point out the stupidity and awesomeness of a couple things. First, watching Bradley Cooper slurp up drug-laced blood like a meth-addled vampire was ridiculous and hilarious. Second, I love how a drug that makes you smart makes you realize that the best way to attack someone in a park is by brandishing a little girl in ice skates as a weapon. How was that a better idea than a baseball bat or any of the other possibilities shown? So dumb…but kind of great, too.
Posted by Eric Harris at 7:19 PM