Where to start with this one? Synecdoche, New York is a complicated, funny, depressing, disgusting, impressive, ambitious, and beautiful film about playwright Caden Cotard (Hoffman), who may or may not be dying and his attempt to stage a play about everything that takes place in a constructed New York within a giant warehouse 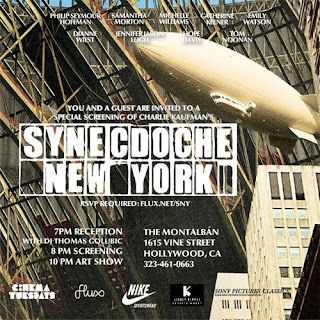 with people becoming characters and characters becoming people. So this is standard stuff for Charlie Kaufman (Eternal Sunshine of the Spotless Mind, Adaptation) but maybe not so standard for the average filmgoer. The story is much more complicated than I just put it, and looking back at my sprawling single sentence description, that's saying something. The trick is to watch this movie without trying to understand every bit of it. It's a lot like reading Shakespeare (I'm not saying this is as good as anything Shakespeare wrote, but the the best way to watch/read this film is similar to reading Shakespeare). You might come across words you don't understand in Shakespeare, but the language sounds great and if you can get the main point out of the overlong speeches, then you'll do okay. If you sit there and try to understand every word of a Shakespearean play, then you will probably not enjoy it. Same goes for Synecdoche. If you ask yourself why does this character age and this one doesn't?, or who is this new character and why is she taking up so much screentime all of a sudden?, then you will not enjoy this film. You can analyze it, but looking for some definite meaning behind it will only leave you angry. So don't just try to figure out "what's really happening" in this film, allow yourself to watch it first.

Now that my opening rant is over, let me say that I did enjoy this film. It wasn't life changing or anything and it didn't really make me evaluate my life (more on that later), but I was constantly interested and Philip Seymour Hoffman gives possibly the best performance of his career. I 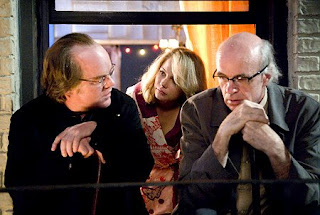 know he's done the whole depressed, mumbling artist before (The Savages), but I hated his character in that film. I found myself hoping for the best for Caden Cotard in this film, even though he comes across as a bit pretentious and selfish. Okay, not a bit, he is completely selfish and completely obsessed with himself. He puts on a play of his own life, then has somebody not only play him, but also play him directing him, while he watches it all. It's a fine line between ambition and selfishness, yet I enjoy watching him. And he plays an old man to perfection. It's almost creepy how much he changes throughout this film. And the performances around him are very good as well. I thought Samantha Morton was great and Tom Noonan really stood out as Caden's stalker/portrayer. Catherine Keener did a good job, but I wish she would stop playing these disconnected, miserable wives who end up being even more selfish and despicable than the disconnected husbands that she's leaving in the first place. So she was good in that I hated her character, which may not have been the point, but it created a reaction for me, so there you go.

It may seem like I haven't necessarily explained what the movie is about, so I want to point out that this film is really an examination of life in general. There may be theories of the afterlife, the subconscious, the fear of death, the awkwardness of relationships, but all of that adds up to life in general. Just listen to the characters discuss the play. When they talk about the play, they are talking about the movie. It's almost like breaking the 4th wall, but I thought it was an interesting way for the filmmaker to reach through to the audience and say, "you are all right and you are all wrong. It's about life, so it's going to be different for each living person." But the film isn't so strange that it's all about interpretation. There is a straightforward story here, but it's about more than just a play. Also, one of the strangest things is the film is a constantly burning house. This may turn some people away as being too stupid or absurd. But it is a cool and funny idea, really. And if you can accept it and continue with the movie, you'll be doing yourself a favor.

The burning house is just one of the interesting visuals. Just imagine a portion of New York City in a giant warehouse, with a second warehouse and a second NYC , and then a third. Anyway, it looks amazing when you see a New York skyline with a warehouse roof above it. It's massive and impressive, without being too showy. Obviously this is not an effects driven movie, but it does contain some impressive visuals that are there for the story, not vice versa. 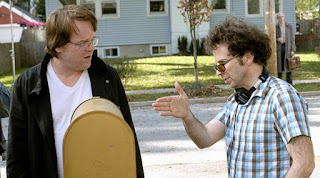 Now on to Kaufman himself. I'm not sure if I really like his work. It's all interesting, but sometimes it comes off as being complicated for the sake of being weird. I didn't get that feeling with this film. It might be because he directed this one. It's his first directorial effort and that might be the most impressive aspect of it; that he would attempt such a complicated film for his debut. I don't think he'll match this film, but his directing career is certainly going to be interesting.

I had to wait on DVD for this (since I think it expanded to a total of 50 theaters before it was pulled) and I checked out a few special features. There's a behind the scenes type thing that covers multiple aspects of the making of the film. A featurette with Hoffman talking about his character which I turned off because it was late when I watched it and it was about to put me to sleep. There's a conversation with Kaufman and some British guy that I did fall asleep during because the British guy didn't seem to know how to talk to Kaufman. But there is one interesting feature, a five-person conversation about the film with five critics/bloggers. It's interesting and a must-see if you want to know about some of the philosophical references (which I completely missed because I'm just not into philosophy, which might be a philosophy all it's own...). Apparently Caden's last name of Cotard refers to a syndrome in which a person believes that he/she is dead, dying, or missing/losing organs. There's a few more, but you're better off watching the feature for yourself. Just make sure you have a dictionary handy, these guys are pretty uppity and love to throw out references to obscure films and they love to use words that nobody uses in everyday language. But there's good information in their conversation, even though I think their emotional reactions to the film are exaggerated; one guy claims he must drink after watching the movie, one claimed that he went into a two week depression after watching it, and at least three of them admitted to weeping either during or after the film. Maybe these critics are much more in touch with their emotions than I am, but I think the majority of the people out there are not going to be that changed by this film. It is just a movie after all. The critics also claimed that this film will cause you to examine yourself more than the film. I have to disagree. I was able to look at the film for what it was, not as a referendum on me, personally. Sure, I can relate to aspects of it, but you know what? I can relate to aspects of Transformers, but we don't mention reactions to movies like that. I'm sorry, but Synecdoche, New York and movies like Transformers do have something in common, they're movies and they are meant to entertain. So ignore some of the more pretentious critics of this film and remember that it is not an essay on philosophy and it's not a pyschological exam made just for you. It's a movie, enjoy it.

Few more things: There's a podcast called the Slash Filmcast (you can find it on iTunes or at http://www.slashfilm.com/) that recently reviewed Watchmen along with Kevin Smith. It's lengthy and they talk about almost everything that I wanted to talk about with it, so check that out if you want more Watchmen stuff. And check it out if you like movies in general, because those guys are by far the best of all the movie podcasts out there. They don't just agree with each other, like most podcasts, they have actual conversations. And they are going to do a show on Synecdoche, New York soon and it will certainly be interesting, with many different interpretations.

Almost forgot, if you're wondering about the title, it's part a play on words because the film takes place in or near Schenectady, New York. And the word synecdoche itself is a figure of speech that uses a part of something to refer to the whole (i.e. faces in the crowd referring to complete people) or vice versa. Look up some more examples if mine doesn't make sense. But the point is that the play he's putting on is a part of life referring to life in general, but sense it's a play, it's really not life...or maybe not. That's what I gathered from it, though. But everyone's different.


Next: Happy-Go-Lucky, possibly a retro review of RoboCop, and I might check out Knowing.
Posted by Eric Harris at 2:11 PM