I'm going to keep the reviews to just one paragraph each this time since I'm also putting my top ten list on this post and I don't want this to be epic in length. 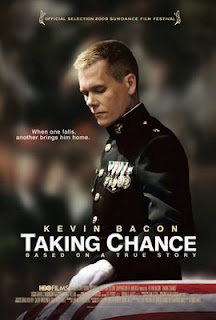 Taking Chance is an HBO film starring Kevin Bacon as a number crunching Marine who has a guilt complex for not going to Iraq, so he volunteers to escort the body (PFC Chance Phelps) of a fallen Marine home to Wyoming. This is based on a true story and it is definitely as depressing as you might imagine it is, but I found this to be a powerful film. It's kept short and it shows a side of strangers in this country that is refreshing. By that I mean that strangers treat Bacon very well and show reverence for his situation. It's rare to see a film that doesn't make everyday regular people out to be immoral shells. That, along with the idea of a young man dying for his country and the effect it has on people that didn't even know him, makes this an extremely emotional film. That doesn't mean it's completely depressing, though. When a film makes you feel something, anything, it reaffirms your own humanity and that is anything but depressing. Also, this is based on a true story, which certainly makes it easy for the viewer to connect with it.

Quarantine is a horror film about a group of people who are, you guessed it, quarantined in an apartment building due to a strange sickness that causes people to act with rabies-like symptoms. Quarantine shocked me for two reasons. First, a few parts made me jump, so it came through with a few legitimate scares, thanks to the claustrophobic setting along with the use, and lack, of lighting. Secondly, this film is extremely entertaining and I expected it to be a complete ripoff and mishmash of every horror film released in the last ten years. Is anything new done 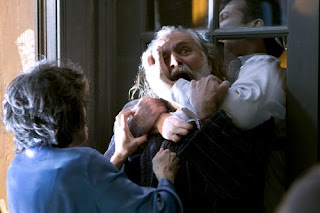 here? No, but just because the film isn't innovative doesn't mean it isn't fun to watch. I enjoyed the Blair Witch style (not too shaky like in Cloverfield, due to the plot point of an actual cameraman using the camera) and the noises the infected people made were truly freaky at times. Also, there are a couple of very good stunts in this that will make you rewind the film just to see if it was actually done practically or if it was CG (I'm talking about the fall from about midway through, not the shock fall earlier on, though that first fall is surprising). Oh, and if you're into firefighting at all, the first fifteen minutes, which are meant to set up a few main characters and explain why the camera is there in the first place, is actually entertaining and does not feel like a forced set up at all. So, this movie, which I didn't even plan on reviewing at all, turned out to be a fun little horror movie that deserves a watch, even though a scene from the preview completely spoils the ending. And check out the behind the scenes featurette on the DVD if you want to see how complicated it actually was to edit this film to make it seem like a long continuous take. There's also something on the makeup and a short featurette on the stunt I mentioned above. 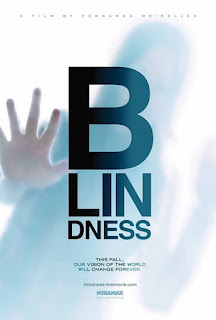 Next: Choke and Australia on DVD midweek, then Watchmen for next Sunday. I'll have a lot to say about this so I'm keeping it to just one movie on Sunday, especially since I'll be watching it on IMAX, which I haven't seen yet, so I'll have a bit to say about that as well.
Posted by Eric Harris at 4:10 PM