"The Curious Case of Benjamin Button"

*I'm going to try and keep this plan of writing a midweek DVD review, but I may lapse from time to time. Also, if you haven't already, hit up that poll on the left!

I reviewed this a while back when I was still writing my reviews through a Facebook application, so I figured I should give this one a full review here.

When I first saw this I thought it would be a lock for best picture. Then the Slumdog Millionaire craze took hold and everybody seemed to forget about this movie. Instead of calling it magical or whatever, they were saying how it had no heart and was an unofficial sequel/remake of Forrest Gump. I can see the Gump comparisons, but that didn't bother me because I like Gump and it's the same writer, and let's face it, everything's a copy of everything if you look deep enough. What I cannot understand is the claim that this film lacks emotion, or heart. That blows my mind. One more response to a complaint: one critic (well, it was from a slightly popular movie site, but it's still a critique) commented that if the whole backwards aging thing was taken out of the story, then there wouldn't be much there. Seriously? Okay, let's apply that to every film out there. Take the idea of the Force from Star Wars and it's kind of boring. Take the powers away from (insert comic book character here) and it's really a basic story. The point of the film is the struggle of life if you age backwards, so of course the movie would be empty without that aspect! I just had to rant a bit there because it angered me that this movie turned into the film to pick apart once Slumdog fever took hold.

Anyway, this film, if you didn't already know, is about Benjamin Button, a man who ages backwards. He doesn't just age throughout the movie, though. Benjamin has a life and it's interesting and a bit depressing. Left at an nursing home by his father, Benjamin grows up around death and is told he is likely to die soon, himself. The whole idea of death looming at all times finally gets Benjamin going. If he might die soon, better to die while actually experiencing life. So he strikes off on a Forrest Gump-like journey in which he tries to figure out where he fits into it all. Of course he has a love interest or two along the way, the main one involving Daisy (Blanchett), which show how timing can be everything in a lifetime.

Now on to the acting. Many critics have said that the aging effects outshine Brad Pitt's performance in this. I disagree completely. In fact, after my first viewing, I was impressed with

how Pitt was able to transcend the CG-work and actually give a performance. The CG is great, but look at Pitt's eyes in the early scenes. I have always felt that great acting is done through the eyes (a little glance or twitch here and there goes a long way in my book). Pitt adds humanity to the role through his eyes and his voice is heartbreaking at times. Blanchett does a fine job herself, though I had trouble understanding her lines in her old age segments. Jared Harris adds a lot of fun to the film as the drunken sea captain (yes, I know, Gump, Gump, Gump) and Jason Flemyng makes the father character a bit more interesting than he may have been in a lesser actor's hands. And, of course, Taraji P. Henson anchors the first half of the movie as Benjamin's adoptive mother.

The CG effects and the acting are impressive throughout this film, but the style David Fincher creates is what makes this film great. There is a storybook quality to this movie that's hard to completely explain. The story itself, the use of colors, the blurring effects, the narration, the quirky side characters (like the guy who was struck by lightning seven times), and just the way the story is told in general all create an effect that you don't get out of movies very often. And while this 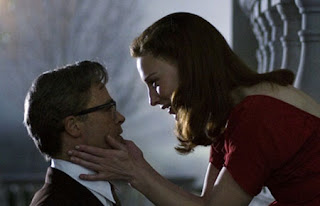 movie may run a bit long, it's that storybook quality that makes it all worth it.

I need to say more on David Fincher himself. This is the same guy who made Se7en, Fight Club, and Zodiac; hardly storybook-type films to say the least. But they are stylish films and this movie is further evidence that Fincher is one of the best directors working today. If he keeps this up, it won't be long until he has an Oscar or two.

So be sure to check out this film and don't get hung up on the Forrest Gump comparisons and certainly don't watch it wondering if it would be any good if the aging gimmick was removed (in fact, don't look at any movie's main feature and imagine what it would be like without it). Just let yourself fall into the story as I did and you'll find yourself wondering how anyone could think Slumdog Millionaire is a better film.

Next: Star Trek
Posted by Eric Harris at 4:16 PM