Why Romero's Zombie Movies Are Awesome 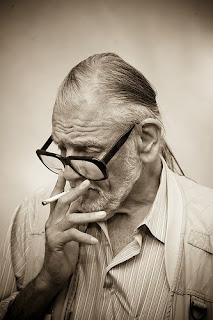 Zombie movies, particularly those of George Romero, hold a special place in my heart. What can I say, I dig apocalyptic that have as much gore as social commentary. A good zombie movie has that perfect blend that has you laughing at the ridiculous violent one minute and asking yourself who the zombies represent the next. Most of George Romero’s zombie movies accomplish that, starting with Night of the Living Dead.

I’ll be brief with Night, since it’s been analyzed so many times before. And, honestly, I respect it more than enjoy it. It began one of my favorite genres, but it shows its age and lack of budget these days. I know many people enjoy it outright, but I’m a much bigger fan of Dawn and Day.

Dawn of the Dead, the masterpiece zombie movie set in a shopping mall, has also been analyzed quite a bit. It’s a statement about the material society we live since a shopping mall offers refuge. And who really represents humanity, the living or the dead? I’m not big on looking for representations in a zombie movie. You know why I think it takes place in a mall? Because the setting supplied the characters with everything they needed. It also allowed some humor. Parallels can be drawn between society and zombie movies quite easily (they are usually pretty blatant in their ideas about humanity), but I find more enjoyment from them when I stay with what’s onscreen 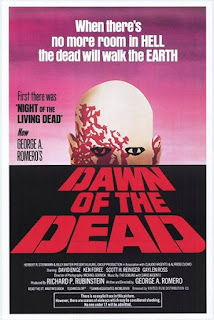 and leave it at that. So I don’t watch Dawn and question my materialistic nature, I watch it for that helicopter/decapitation scene. I watch it for that exploding head near the beginning. I watch it for Tom Savini’s cameo. I watch it because, like in every Romero zombie flick, it shows, rather than implies, that some people can end up behaving worse than zombies when faced with extinction. That is the philosophy and deeper meaning that I find most important and it’s also one of the most obvious points Romero likes to make.


That point is made to perfection in Day of the Dead. I might be in the minority here, but Day is my favorite zombie movie. The acting is over the top and the dialogue is goofy as hell, but I love every minute of it. It is a zombie movie after all; shouldn’t everyone be talking and acting in exaggerated ways? I know I would be in those circumstances. The setting is perfect. Day takes place in an underground bunker in which a power struggle between a group of scientists and their military protectors is about to boil over. The scientific aspect is what leads to a thought-provoking aspect in the zombie world. A doctor is trying to domesticate a captured zombie and is slightly successful. The implication of this is that zombies are practically the next stage of human evolution. They already have the numbers, and now we see that they are capable of human instincts and even slight thought. That is more terrifying than a splatter of gore.


But speaking of gore, Day does not disappoint. There is some truly disturbing and disgusting stuff going on in this one. People are ripped apart and feasted on and it’s all quite messy and noisy. It’s not all fake blood and pig intestines, though. There is some real wizardry at work with some of the set pieces in the laboratory. For example, there is a very realistic body with a completely exposed brain instead of a complete head that moves around convincingly. There is 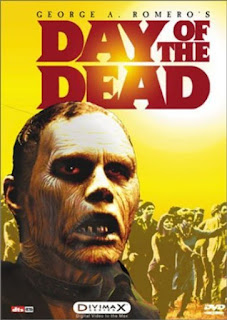 also an impressive effect late in the movie in which the top half of a zombie’s head is cut off with a shovel and the eyes keep moving.


All of this is set to an amazing musical score that accents the ideas of the film well. I don’t know how to put it, exactly. At first, the music may sound dated and cheesy, but it just fits perfectly. In a scene in which the characters discuss possible reasons for the zombie outbreak, the music serves the conversation with a hopeful quality that is always welcome in a zombie film.


The conversation raises some great questions as to why a zombie outbreak might occur. Once again, these are not implied ideas, but ideas blatantly spoken between characters. The chief idea is that humans have become “too big for their britches” and God is telling us that it is time to get back to the basics, away from all the science and technology. It might not be a groundbreaking thought (it seems every natural disaster get’s compared to God’s wrath these days and it was the first response by almost every early culture to think that a god was punishing them when things went bad), but that’s the point. It doesn’t have to necessarily be original. It just needs to be presented in an interesting setting, and what setting is better than a zombie film?


Now back to that whole idea of humans being worse than the zombies. This will get into SPOILER territory for Day of the Dead. In this film, a zombie actually becomes a protagonist. Those military guys I mentioned above go a bit crazy and start to take over. And when the commander (who has the best death scene in zombie movie history as he yells “Choke on ‘em!” as the zombies rip out his insides and begin to feast) kills the main scientist, the trained zombie breaks free and looks for revenge. You know humanity is in bad shape when you’re rooting for a zombie to kill one of the last survivors of the human race. Oh, and any movie that has a line like “I’m running this monkey farm now, Frankenstein, and I want to know what the **** you’re doing with my time!” is awesome in my book.


Before I wrap this up, I want to acknowledge the other two Romero films: Land of the Dead and Diary of the Dead. I am actually a fan of Land, since it expands on the whole evolution storyline and because it contains some funny zombie moments. It just didn’t have the mood and style that I grew to love in Dawn and Day. Still, a very enjoyable film. Now Diary, on the other hand, was awful. Romero tried going back to his low budget roots with this one but took about two steps too far back. The man used CG blood in a zombie movie! That is unforgivable. He wanted to go low budget, yet computerized blood was somehow cheaper than corn syrup and red dye. I have other issues with the film, but it’s really not worth getting into.

Zombie films are a special breed of film that allows deep thought and obvious fun. It just doesn’t get better than that. Whenever the enjoyment of a film can come from multiple interpretations while there is visceral action and comedy onscreen, then something awesome is at work.
Posted by Eric Harris at 1:38 PM