*I know I'm late this week, but what with it being a holiday weekend, I was a bit busier than usual on Sunday and just couldn't find the time. To make up for it, I've added an extra review and another Crappy Classic for today. Also, if the amount of votes on the poll seems strangely high, that's because I submitted my John Carpenter article to the IMDb hitlist (a collection of links at the bottom of the page) and they listed it today. That basically means that my usual 20 visits a day is going to end up being around 10,000 by the end of the day. So expect me to continue on with the Wednesday articles, but I promise to keep up the actual reviews (since that is what this site is supposed to be about).

Remember, this Kurgan worthy movie is just an action film. 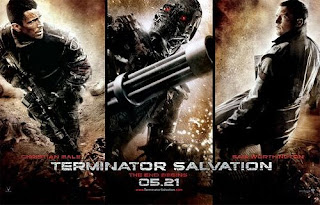 first place, but in Terminator 3 (which I actually enjoyed) the machines won and the world as we know it came to an end. Fifteen years later John Connor (Christian Bale) has shed his punk image (T2) and drug habit (T3) and is now a hardened, almost emotionless (aside from extreme anger) soldier.

This movie is at its best when the action is going on and that’s how we are introduced to this new Connor. An amazing sequence (cut to look like one long take) follows Connor out of a pit, into a helicopter, the crash landing of said helicopter, and an intense one on one fight with an injured terminator. It’s a great way to kick off this new type of terminator movie. Connor isn’t going to have to run away from a single machine for two hours; he’s going to have to wage war with all of them. I, for one, welcome this change.


I didn’t need another Terminator with the protagonists constantly on the run. I wanted to see them attack, and that’s exactly what I got. Others might be disappointed, however. Aside from a few callbacks to the original three (a song, a couple of trademark lines that come off a bit cheesy, but are good for a laugh), this is more of a war film, than a survival film. For instance, we see the resistance, but we do not get the usual expository scenes that explain how they get food or weapons or even how they have bases that are “safe” after fifteen years.


Instead, we get a bleak, gray future where life is survival. I found the surroundings to be as much of a character as Connor because they create a real mood and style for the film. But it might be too bleak for some.


The acting doesn’t really help out with the depressing mood of this film, either. Bale does little more than scream angrily throughout, which may remind people of his curse-laden tirade that was released from the set of this film a few months back. Sometimes his yelling just didn’t fit with the scene. Sam Worthington (as Marcus Wright, an interesting new character with mysterious connections to the machines) on the other hand, adds some charisma to the cast. And even though Bale is featured heavily in the previews, this is as much Worthington’s film as it is Bale’s. That might turn some people away, as well. People expecting Christian Bale in every scene will be disappointed. But I found Worthington interesting enough that I didn’t mind when Bale wasn’t onscreen.

Anton Yelchin, Moon Bloodgood, and Bryce Dallas Howard round out the cast, but Yelchin (Chekov in the recent Star Trek) is the only one worth mentioning. That is only because he is playing the younger version of Kyle Reese (Michael Biehn in the original), who is actually Connor’s father, due to the time travelling element from the first three films. It’s cool to see the young Reese and see how resourceful he is and how that resourcefulness will eventually come in handy for the character.

If it seems like I have mentioned the story much, it’s because I didn’t find it that important and all a viewer really needs to know is that there is a war going on between man and machine. Some

have complained that this movie is dumber than its predecessors and that the story isn’t nearly as profound. I think that people are sugarcoating their memories of the first two films a bit, though. Let’s face it, the first movies rely on the idea that robots travel back in time and that John Connor sent his own father back in time. That’s more ridiculous than profound. So I didn’t miss all those great “ideas” about humanity that were apparently featured in the original films. I viewed this one like I did the others: as an action film. Is it better than T1 or T2? No, but it’s better than T3 and the action holds up in comparison to all of them.

*Now for the weekly SPOILER section: The main thing I want to mention here is the appearance of Arnold Schwarzenegger was awesome. They did some great work making it look like 1984 Arnold was actually onscreen. To me, that scene alone makes this movie completely worth it. Just to see that classic, slow head turn after being punched put a smile on my face.

About the PG-13 rating: I've talked to a few people wondering if that hurts the movie at all. Honestly, I didn't notice any edits for content. No weird dubbing over cussing and no strangely cut action. These days, violence doesn't get you an R rating unless it's just ridiculously gory. And when you're dealing with robot violence, it's easy to be brutal without gore. The absence of the f-word isn't a big deal, either. Christian Bale is intense enough without strong language, so you get his drift without the vulgarity (but if you want the vulgarity, just listen to his rant).

Oh, and McG needs to use his actual name from here on out. "Directed by Joseph McGinty Nichol" would look much better onscreen. Even if he turns out to be a consistently good director, I will always laugh and/or cringe when I see the words: Directed by McG. 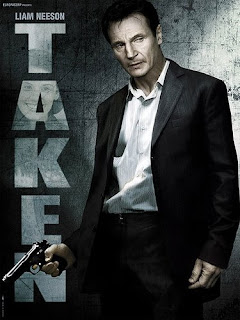 I'm going to keep this one short. Taken is a very entertaining movie about a devoted father who is willing to do anything to save his daughter. Are some parts of it stupid? You bet. The daughter is a bit unrealistic, jumping up and down and running to her father every time she sees him (one time might be okay, but when she sees him at a lunch that she set up, she should not run to him like it's some kind of surprise). Other than that, this is a fun movie just for the fact that some surprising things happen. There might be gunshot here or there that you wouldn't expect, which was refreshing since the movie plays on your expectations. And it's great to see Liam Neeson in action mode. I was just happy to see the guy get a starring role in what turned out to be a very profitable film. Oh, and a PG-13 rating may not have affected Terminator, but it messed a few scenes up in this film for me. When someone gets shot in the face, their should probably be blood, but not in this movie. I'm not expecting a brain splatter against the wall or anything. I'm expecting the filmmaker to cut away and imply the gore if he's not able to flat out show it. Not a huge problem, but it did take away from what could have been an extremely brutal movie.

Stephen King movies are wildy hit or miss. This film, about a giant rat/bat creature that terrorizes a textile mill in New England, would probably be considered a miss for most people, 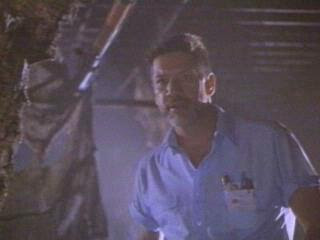 but a strangely entertaining performance and the general feel of the movie make it a hit (not financially, of course) to me.

Stephen Macht carries this film. His completely over the top New England accent is hilarious. Lines like: "The show's o-VAH!" make me laugh to this day. Every scene he is in is entertaining due to his performance which makes it a damn good performance in my eyes. People forget sometimes that actors know what they're doing at times. I truly believe that Macht was aware of how fun his performance was. He knew he was in a low rate Stephen King flick (in the early nineties no less, when they were churning out King movies every other week it seemed) and he decided to try something different. And his performance makes this movie stand out.

Aside from Macht, the rest of the movie is quite plain. But the filmmakers did an excellent job of creating a rundown factory. I've worked in an older factory before and I can tell you that this movie captures the essence of a place like that. It's loud, dirty, and looks as if it's been closed down for years, but is somehow still kicking. It's nothing groundbreaking, but it helps make this movie interesting. So enjoy the mood of the film, and laugh with (not at) Stephen Macht and his strangely hilarious performance.

Oh, and Dourif is in there to lend this some horror movie cred. His character is not really necessary, but I didn't mind it because when Dourif gets to cut loose it's always fun to watch.


For Wednesday: Another article, haven't decided on what it will be yet.
Posted by Eric Harris at 11:53 AM