I don't have a line or anything for this one, I just liked it a lot. 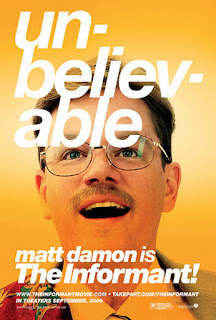 The Informant!, the latest film from director Steven Soderbergh (Ocean’s 11), is a strangely funny take on corporate whistleblower movies like Michael Mann’s The Insider. This isn’t a spoof movie or anything, though. It’s actually based on the true story of Mark Whitacre, a VP of an agri-business company that has been involved in price fixing, who turned FBI informant on his company, ADM, in the early to mid 90’s. Based on that short synopsis alone, the film doesn’t scream comedy. In fact, if you look into the true story (which I wouldn’t advise doing until after you’ve seen the film) you’ll see that the story is somewhat tragic and that Whitacre is more troubled than funny.

For the purposes of the film version of Whitacre’s story, however, he is certainly a more light hearted character. Normally, a film like this would feature tense scenes with shady business leaders and veiled death threats aimed at the informant. Instead, we get a goofy mustachioed Matt Damon, who fantasizes about playing a part in Michael Crichton novels and movies. The evil corporation doesn’t really come off as evil and it’s hard to get behind a story involving the price fixing of lysine (one of those chemicals that we never hear of, but ingest daily). Sure, the fact that companies were setting prices while consumers paid more is upsetting, but the story seems better suited for an episode of “60 Minutes” rather than a feature film. The filmmakers saw a comedy in that story, though, and it’s a good thing they did.

Whitacre goes through his business life and his spy life in a slightly bumbling manner. His thoughts are rambling and sometimes these voiceover thoughts actually drown out conversations in the movie. Every single random thought is quite funny, though. Example: “Polar bears would blend in completely if not for that black nose. I wonder how they figured that out. Maybe looking at other bears, or seeing their reflection? I don’t know. That seems like an awful of thinking for a bear.” To hear a monologue like that in between scenes in which a business executive is secretly recording price fixing meetings is so strange and original that it has to be funny.

As usual with a part like this, the character is only as funny as the actor and Matt Damon is perfect in this. In my opinion, it’s his finest work yet. He is so naïve in his delivery of lines like, “Once this all blows over, I’ll still be okay with the company, right?” and he makes such idiotic and childish faces throughout the film that you get behind him in the story, even when things start to get a little darker in the second half. The title sequence and marketing materials claim “Matt Damon is The Informant!” I can’t think of a better way to sum up how great his performance is in this film.

The supporting cast is impressive as well. Scott Bakula is entertaining as FBI agent Brian Shepard. Joel McHale (of “Talk Soup” fame) is an interesting choice as a fellow FBI agent and while 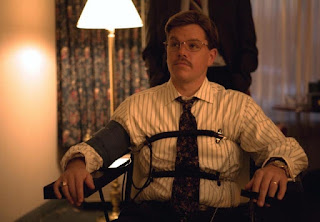 he doesn’t have many funny lines, McHale makes up for it in the disbelieving stares he gives in response to Whitacre’s claims. And look for some interesting cameos from people like Patton Oswalt and the Smothers Brothers.

The comedy is a bit out there and so is the style. Even though Soderbergh sometimes makes mainstream movies that doesn’t mean they are devoid of style. The Informant! is no exception. Think of the Ocean’s trilogy and you’ll have the right idea of the look and sound of the movie. Soderbergh uses soft lighting and colors that give the film an interesting look at times. And the choice of music is quite strange and a bit overbearing at times. I heard someone compare the music to an Austin Powers movie and I have to agree. It’s a weird choice, but the musical cues are funny at times. Aside from the music choice, though, the style does place the film distinctly in the early to mid 90’s. From the clothes to the way the film was shot you get the impression that this story is taking place about fifteen years ago.

If you’re like me, you find stories like The Insider interesting, but they make for boring films. I know that most people consider that film to be a masterpiece, but I thought it dragged along. Apparently Steven Soderbergh shares this opinion because he took a true story with parallels to The Insider and turned it into an entertaining, albeit strange, comedy with an ironic exclamation point in the title. The Informant! could’ve been another boring masterpiece, but with Soderbergh’s direction and Damon’s performance, it ended up being a hilarious movie.
Posted by Eric Harris at 4:37 PM