Chigurh was enthralled by the gang aspect of this film.

Sin Nombre ("Without a Name") is an interesting, powerful, and occasionally brutal film about gangs in Central America (and Mexico) and the journey illegal immigrants undertake to make it to the United States. But it's not just about those two things because if it was then it would be better suited as a documentary. It's also about how love can make even a hardened gang member grow a conscience and how even though the masses of people outside of America trying to make it in may just be a number to most, they each have their own story and reason for making such a risky trek. Maybe that second part sounds a bit too pretentious and political or liberal or whatever, but the gang member aspect interested me immensely.

Now, I'm not one of those people that idolizes gangs and thirsts 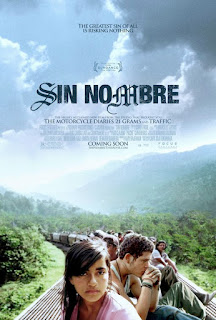 for knowledge about the Crips and the Bloods (I personally prefer watching the fictionalized Italian and Irish gangsters from New York), but the gang represented here (Mara Salvatrucha, or MS-13) interested me instantly with their tattooed faces and brutal tactics (early on a new young member is "jumped" into the gang and is then forced to kill a rival gang member). But it isn't just the brutality. It's the character of Willy/Casper (real name/gang name). He starts off like your typical gang member; he steals whatever he can get his hands on, seems to have no problem killing, and has as much reverence for his gang as most people do for their religion. That kind of blind devotion to rampant and seemingly pointless gang wars usually makes me hate a character instantly. I found Willy sympathetic, however. He does reform, in a way, and if there has to be a good guy in the film, it would be him. It's more than that, though. Willy comes across as a human being and a moral one at that. I doubt many people would call this film hopeful, but I find some in his character and it really sets this film apart.

I may have glossed over the illegal immigrant aspect of this film and I don't want to downplay that story at all, but I just found the gang story much more interesting and moving. That's not to say the immigrant side is done poorly or is uninteresting. The journey, which takes place mainly atop trains travelling through Mexico, does feature some of the best images from the film.

I have to add that this film shattered my expectations early on. I thought this movie would dwell on the journey to America, or the the tension between the gang leader and Willy, both of which could make an entire movie unto themselves. But this movie kept things moving quickly. It introduced a situation and moved on from it. It was refreshing to see a foreign language film do that. Usually movies like this beat you over the head with misery, and while this film certainly isn't a happy one, it's not out to ruin your day, either.

The scenes atop the train and a dash of style here and there (a knockout scene in particular) make the movie stand out a bit, but this a much more character driven film and I was glad that it didn't try to get too flashy. So check this out if you want a look into gang life and the journey of illegal immigrants.

The Kurgan enjoyed this home invasion flick a bit more than the others out there.


The Last House on the Left is the disturbingly brutal remake of the Wes Craven film of the same name. I never watched the original, so this review will not be a comparison piece at all. The film, about a group of criminals (led by Dillahunt) who terrorize a family in a secluded lake area, isn't exactly a classic, but it does have its moments. I'm usually apprehensive about the sub-genre of horror that deals with lunatics randomly assaulting a family with no clear goal in mind. I know some people dig movies like that, I'm just not one of them. This film, however, made a bit more sense to me. For starters, the young woman of the family (Paxton) and her friend stumble across the crazies (which is how I choose to refer to them) first, rather 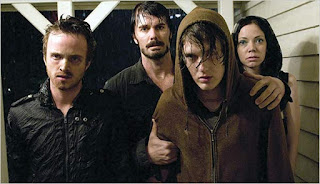 than the crazies showing up out of nowhere knocking on the window. Then the crazies seemingly stumble onto the young woman's house, where a little bit of tension is created, before it gets really violent.

I'm not going to go into detail on this one. You know what you're in for with a movie like this and The Last House on the Left doesn't disappoint. The standouts (good and bad) include a much talked about creepy and uncomfortable rape scene (aren't they all, though?), some satisfying violence including a garbage disposal, and a ridiculous, but hilarious, scene involving a microwave. Aside from that, what can I say? There's a reason movies like this aren't screened for professional critics when they are released. No one cares what a critic has to say about a horror/terror movie. So why am I wasting my time? I really just wanted to point out that garbage disposal and microwave part. But I guess I could mention that it's good to see Aaron Paul (from AMC's Breaking Bad) getting some film work and I've become a fan of Dillahunt since The Assassination of Jesse James and No Country for Old Men. I must say, though, I wish he would stick to less psychotic characters.

I can't think of a more fitting representation of a crappy movie involving electricity. 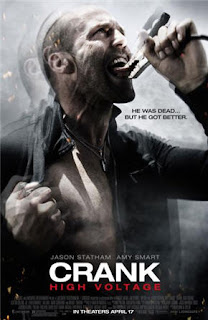 Speaking of movies not screened for critics and my opinion not mattering one bit, here's a little something on Crank: High Voltage. It's stupid, incredibly stupid. But that's what you should expect if you watched the first one. I seem to remember slightly enjoying the first one, though and I found almost no enjoyment with this one. It's too idiotic, the action is filmed in such a way that I can't tell what's happening most of the time, Amy Smart looks more like a meth addict than usual, Statham is starting to wear thin, and Clifton Collins, Jr. is wasted in his unfunny over the top role. I only mention this film because of one random scene featuring Glenn Howerton from It's Always Sunny in Philadelphia. I don't want to give it away, since the end of the scene might provide the only enjoyment you get from this film (as it did for me), but if you want to skip the other 93 minutes of the film here's a link to a crappy quality youtube video of the scene. But hey, if you really liked the first one, you'll probably disagree with me completely and love every minute.
Posted by Eric Harris at 5:19 PM