A Kurgan for now, but this one might age into a Chigurh. 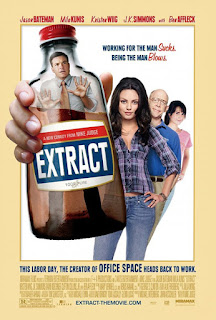 Extract, the latest from Mike Judge, is a low key, strange comedy that may not reach the cult status of Office Space, but is still a very enjoyable film. The story isn't traditional by any means. Jason Bateman plays Joel, the owner of an extract company who is just going through the motions, hoping to sell the company and get out of the rut he is in. Before that can happen, though, a freak accident involving the loss of one and near loss of the other ("it's barely hanging on") of a worker Step's testicles (Clifton Collins, Jr., an increasingly enjoyable actor), slows down the sale of the company.

Enter Mila Kunis as con artist Cindy. She makes sure the accident turns into a lawsuit so she can swindle as much money out of Step as possible. Meanwhile, she flirts away with Joel, leaving him to believe that all he really needs is some infidelity to make things better. This is where Joel's bartender buddy, Dean (Affleck), comes into play. He's the pill popping devil on Joel's shoulder and he makes for some of the funniest dialogue in the movie. But it's not that loud, weird funny of a Will Ferrel comedy. It's the little things. The slow taking of a drink away after accidentally giving Joel a horse tranquilizer. His claim that he takes Xanax for the common head cold. There are a few lines that stand out, but for the most part the conversations in general bring the laughs.

That's not to say that Affleck is the only funny thing here. David Koechner is perfect as the annoying neighbor and his character has an amazingly funny pay off. Bateman is funny as well, in kind of the same way Ron Livingston was funny in Office Space. He's a decent enough guy, who gets pushed to the edge and makes some questionable decisions along the way and his subdued reactions are great. Kristen Wiig is okay in the film, but I would say her performance is only notable because she isn't playing a copy of one of her SNL characters. J. K. Simmons is amusing, but I honestly expected his scenes to be funnier. It seemed like I would chuckle a bit at a few of his lines not because they were funny, but because I really wanted them to be funny. 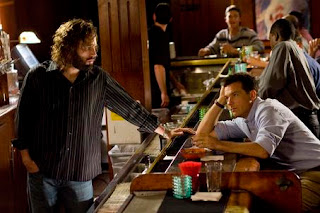 That pretty much sums up the film for me. I wanted it to be hilarious, but it turned out to be just funny. I think this film will sink in after a couple more viewings on DVD, though. This is why Mike Judge's films don't do well at the box office. People don't come out telling all their friends, "You've GOT to see this!" They come out saying, "It was funny, I guess." It's only a year of two later before people realize just how funny it was.

I don't want to sound like I didn't like this movie or anything, though. The bong scene is hilarious with the exaggerated smoke and the hilarious music cues during Bateman's stoned conversation with a creepy pot dealer. Rory, the grindcore band member, is a funny character and Mike Judge's cameo is amusing. And I cannot stress enough how funny Affleck is in this. You just won't hear anyone quoting him or any other character anytime soon. But is there anything wrong with that? It actually makes me feel a little warm inside knowing that I was one of the few to watch Extract when it first came out, because I know it will resonate a lot longer than it's box office take might indicate. It may not end up being another Office Space, but it's still a comedy everybody should check out.

A Chigurh for this powerfully entertaining documentary.

Tyson is the critically acclaimed documentary about the troubled boxer from director James Toback, who finally allowed his interest in Tyson to come to fruition in the form of a full blown feature (he has cast Tyson two of his last three features). I wasn't sure about this movie because I wasn't sure about Tyson himself. Tyson was destroying people in the ring when I was quite 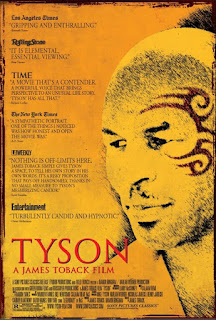 young, so all I remember about him is the lisping, slightly high pitched voice, the rape conviction, his increasingly strange weigh in threats ("I'm gonna eat your children, praise be to Allah.") and the ear biting fiasco. So my image of the man wasn't exactly positive going in. This is not to imply that I think Tyson is a great man after seeing this movie or anything, but I do find him a bit more sympathetic.

Tyson had an interesting life, starting off as a street thug and then picking up boxing in a juvenile correction facility. The fact that he was so talented that he could go from ripping off drug dealers to boxing in the Olympics in just a few years is fascinating. Tyson tells this story in very entertaining ways. His speech has always been a bit hard to understand, but it's his choice of words that left an impression on me. He talks about how much likes women, then says that he must "conquer" them. He picks up these rarely used words ("luminary" and, my favorite, "skulduggery") and uses them in such a manner that I had to look them up a few times to see what they meant and if they were used properly. It turns out he does use them properly, but let's face it, skulduggery is a funny word (and I plan to use it every day for the rest of my life now). It's not only his vocabulary that adds to his personality. Tyson seems to struggle with every sentence and whenever he gets emotional, like when discussing deceased trainer Cus D'Amato, he can barely talk. I have to admit, I felt sympathy every time he teared up.

Toback unnecessarily complicates things at times, though. He uses this overlapping audio track that is simply annoying at times. The film works much better when it's Tyson on his own in front of a stationary camera. Toback did pick some great archival footage for the film, though. Someone like me, who didn't get to see Tyson's early fights, will be amazed at the power Tyson once had in the ring. The guy was a beast, and it makes it all that more sad that he fell so far from grace. I never thought I'd write a sentence like my previous one, but this film, and Tyson himself, make it easy to, maybe not get on his side, but to see things from his point of view. It certainly helps that Tyson himself acknowledges the mistakes he made, but that's not the only reason to sympathize with him. Tyson proves to be more than just a punchline and/or a psycho. It turns out that he's a person, troubled though he may be.

Tyson is an interesting and, more importantly, entertaining documentary. Check it out even if you hate the guy, you might feel differently when it's over.
Posted by Eric Harris at 5:47 PM