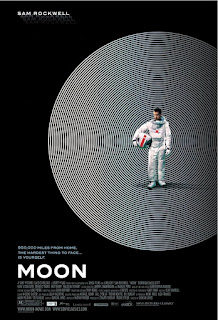 I thought 2009 was a great year for sci-fi, well, action sci-fi, that is. As you can tell from my reviews of last year, I was completely okay with the action packed offerings of Avatar, Transformers: Revenge of the Fallen, Terminator: Salvation, and especially District 9. (I know I’m in the minority in my enjoyment of a couple of these films, but I found the action to be quite suitable in Terminator and Transformers.) The more thought-provoking sci-fi took a backseat this year. Films like Knowing and Surrogates had a few ideas going for them, but they both have their problems. And the most interesting sci-fi film, The Box, fell flat at the box office (I imagine I’ll be defending that film for years to come). Out of all of this comes Duncan Jones’ Moon and it’s among my favorite films of 2009.
Moon is the story of Sam Bell (Sam Rockwell), an astronaut who is near the end of a three year solo stint on the moon, harvesting Helium-3, a new energy source that keeps earth running. Well, Sam isn’t completely on his own, he’s accompanied by his faithful robot, GERTY (amusingly voiced by Kevin Spacey). Things start off smoothly enough until Sam finds someone else on the moon: himself, literally. I don’t want to go any further than that with the plot; suffice it to say that your mind will start running through all the possible answers to the situation.
This leads me to one of the film’s strong points. Moon is blatantly inspired by other, classic sci-fi films. You’ll see shots reminiscent of 2001: A Space Odyssey. You’ll hear music and see plot points that mirror Steven Soderbergh’s remake of Solaris. These are the two influences that stuck out to me, but there are plenty more. Those influences struck me because they serve a purpose regarding the story. Is GERTY evil like HAL? Is the second Sam Bell a creation of the first Sam’s mind or some kind of alien force? These were the thoughts running through my head as I watched and it added to my enjoyment of the film. I think the film is still enjoyable even without knowledge of other films, but knowing about them might help.
This is not to say that Moon doesn’t have a style all its own. The film looks great, especially since it was made for $5 million (an insanely small budget for a sci-fi film). If I would have guessed the amount it cost to make this, I would have said at least $30 million. But Duncan Jones went back to the old ways for this one. Each scene showing the harvesters and trucks on the moon was shot with miniatures, something I did not know until I watched the special features on the DVD. I’m not going to get all preachy and point fingers at CG gurus like George Lucas and James Cameron(I still enjoy all the glory CG can offer), but Jones does show that a sci-fi film can look great without breaking the bank.
The look of the film is one thing, but the atmosphere created by this film is hypnotic. Maybe it’s the way Jones captures the isolation of the moon base or maybe it’s the presence of GERTY, always lurking near Sam. Whatever it is, it worked on me. Duncan Jones created a believable world that I wanted to return to almost as soon as I finished my first viewing.
All of these elements hinge on one thing, however: Sam Rockwell. He gives one of the best performances of the year, or I should say he gives two of the best performances of the year. Rockwell truly makes it feel like there are two different people interacting with each other onscreen. What makes it a great performance is that the interactions between the two Sam’s are at times tense, hilarious, and even touching. The humor is the most important aspect, though. Movies like this can become deadly serious and borderline boring if the filmmakers are not careful, but that is not the case in Moon. The film puts a lot of weight on Rockwell’s shoulders and he carries it well. It’s unfortunate that he is not being mentioned more during awards season. Rockwell proves yet again that he deserves more starring roles.
Rockwell being ignored is one thing, but the film in general deserves much more attention. It was given a weak theatrical release (it wasn’t released anywhere near this area) and since it didn’t create a buzz along the lines of Paranormal Activity, it was pulled from theaters after grossing only $5 million (but hey, it made its budget back, and then some when you add the foreign market). But now it’s on DVD and if you like sci-fi at all, you should at the very least rent this great film.
Posted by Eric Harris at 3:55 PM