No one likes misbehavin' like the Evil Kurgan: "It's better to burn out than to fade away!"

Let me save you a little time with this one: if you don't like Michael Cera, Youth in Revolt is not for you. A number of people have grown tired of Cera's softspoken, lovesick characters and I can completely understand that. He has basically been playing the same character since he gained popularity on Arrested Development. That same character he plays over and over is quite hilarious in my opinion, though. If you hate that character, this film offers a different version of Cera that you might enjoy. 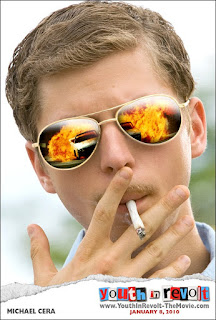 spends a week or two in a trailer park where he meets the love of his wife, Sheeni Saunders (Portia Doubleday). But Nick has to return home, leaving Sheeni behind. They come up with a plan, however. Sheeni will find Nick's dad a job in the area and Nick will misbehave enough to be sent to live with his dad so he can be with Sheeni. If you're familiar with Cera's usual characters, though, you know it is not in his nature to be bad. So he creates a mustached, constantly smoking alter ego a la Fight Club called Francois Dillinger.

Dillinger is by far the best part of this film. Just watching Michael Cera smoke a cigarette is kind of funny and when you add arson and some ultra snide backtalking it becomes absolutely hilarious. Cera shows some real range with this one and I found it to be his most impressive performance. He plays Nick by the numbers, but Francois is something entirely new for him. I'm just not sure if the new character is enough to get people on board with this film (and this past weekend's box office showing of $7 million proves this). The truth is I don't think the character is enough to change your mind about Cera. For one thing, Francois may be featured heavily in the previews, but he is not in the film as much as you would think.

Michael Cera isn't the only person in the film, though. Portia Doubleday does a good job as the love interest and the rest of the cast is rounded out by some very good actors including Steve Buscemi, Ray Liotta, Fred Willard, M. Emmet Walsh, Zach Galifianakis, and Justin Long. The only problem is that these actors are all in what could best be described as cameo roles. I wouldn't say that they are wasted, but it would have been nice to see a few more scenes with Buscemi. The supporting actor that stood out most to me, though, was Adhir Kalyan as Vijay, Nick's new friend. He made a perfect partner in crime with Cera.

The film also offers some quirky style as well that was kind of unnecessary, but still a bit amusing. During a couple of road trips (and during the credits), different styles of animation are used. It added a little something to the movie, I suppose, but I could have done without it.

Youth in Revolt isn't a very stylish film, but there is a definite tone and that tone is quite dark. The nihilistic characters left me with a feeling akin to Observe and Report. Even the good Cera character seems to be devoid of hope. He mopes around with a "woe is me" kind of attitude and, aside from a few passive aggressive comments, he is indifferent to the men his mom shacks up with. Sheeni is basically the same, as she lives as apart from her extremely religious parents as possible. It just seems like everyone is indifferent to everyone else. But that's the perfect environment for Francois to inhabit.

That's really all there is to say on this one. I can't stress enough that this film hinges completely on Michael Cera. I've found him funny in nearly everything he has done (he even has a couple of funny moments in last year's terrible Year One) and with this I am officially a Michael Cera fan. I just hope his future characters are more like Francois Dillinger and less like Nick Twisp.

Big Fan is the darkly funny movie that might be the most aptly titled film of the year. Patton Oswalt is great as Paul, the New York Giants' biggest fan. The film is dark because Paul's life seems so awful: he works at a toll booth, still loves with his mom at age 36, watches the games at the stadium, but in the parking lot through a rigged up TV, and he takes a late night radio sports show so serious that he writes notes to prepare for each call in he makes. But he is seems happy, so what of it? That's enough summary for you; just know that it isn't all that depressing and it's really just a good, simple story with some laughs along the way. I can't stress Oswalt's performance enough, though. He was meant to play this part, it suits him so well. Kevin Corrigan is also good as his equally crazed best friend. Oh, and if you think you take any type of sporting event too seriously, just watch this film and you'll probably feel better about yourself.

I just want to mention A Perfect Getaway because I haven't been hearing much about the film and it bombed at the box office. If you like a well written, amusing thriller, then do yourself a favor and at least rent this one. I don't want to go into plot details too much. I'll just say that a couple (Zahn and Jovovich) goes to Hawaii for their honeymoon and there is a killer couple on the loose. I found the story interesting and performances were pretty good as well. Olyphant sticks out a bit because he gets to overact and crazy it up a bit and that's when he's at his best. So check it out, you won't be sorry.

This movie just spits venom all over the place. There is no joy in it, no camp, no likable characters, etc. It's all very brutal. That's not really a knock on the film, but I could have used a break from the constant cussing and gore in this film. I would have also liked to have a character to slightly care about. I could care less what happened to Laurie Strode in this film. She was hateful to everyone around, she cusses to the point of stupidity, and she is constantly screaming. I don't just mean when Michael Myers is chasing her, either. She freaks out throughout the entire film. Which is understandable since she's been through so much, but I don't want to see it. And you know what, I don't really care for Michael Myers. I'll take my slasher flicks with a hockey mask, thank you. Oh, and someone should have told Rob Zombie, "Make sure Michael wears his mask the whole movie and he shouldn't have dialogue, not even a single grunted word." Zombie needs to take his "vision" (as the previews called it) to an original story rather than trying to force one of his stories into a Halloween packaging. I would much rather see something along the lines of The Devil's Rejects than this miserable crap. If this film had been made by a no-name, I would consider it mediocre, but Rob Zombie is wasting his time with this, so I judge this a bit harshly.

I'm writing a short review on this one because people who know me know that I'm eating crow by giving this a good review. Every time a Pixar movie comes out and people put it in their top ten or just call it the best movie of the year I always roll my eyes and proclaim, "It's a movie meant for children!" Well, I'm not putting this in my top ten (coming soon, by the way), but it's definitely in my honorable mention. The movie, about an old widower (Asner) who uses balloons to take his house on an adventure, is absolutely beautiful (just check out the scene when the house first takes flight in Blu-ray) and it's surprisingly dramatic. The first ten minutes are downright sad. This one just surprised me a bit is all. It's not the best movie of the year, but it doesn't bother me so much anymore that some people claim that it is.
Posted by Eric Harris at 10:30 PM