The film has its moments, but overall it's a bit weak, like Commodus. 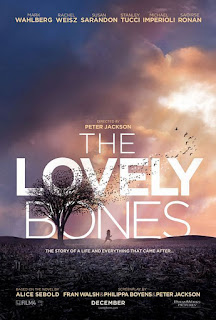 The Lovely Bones, Peter Jackson’s latest, is all over the place but when it’s focused, the film is very effective. The problem, for me, was that the weak moments overshadowed the strong.
The film takes place in Pennsylvania in the early 1970’s. Susie Salmon is a regular 14-year old girl who gets murdered by a creepy neighbor and then spends time in the “in between,” watching over her family as they deal with her death. The problem I had with the film is that she seems to only be watching. While the film pretends she has some influence in the living world, all it really amounts to is her voice breaking through on occasion (save for one nearly pointless moment at the end). So it’s kind of like Ghost, except Susie never learns how to be useful after her death. The film tries to make it seem like she is influencing events, though. Susie says in narration that she has “willed” things to happen, but I don’t buy it. The events she thinks she influences are completely believable without Susie’s involvement, so what is she really doing?
The film’s stronger moments take place in the living world where her father (Mark Wahlberg) is trying to track down the killer. I can’t take Wahlberg seriously after the “Saturday Night Live” sketch about him and his performance in The Happening, but his storyline intrigued me the most. Saosirse Ronan is great as Susie, though. She definitely creates sympathy for her character. Ronan exudes such innocence before her death that you’ll get a true sense of hate for her murderer. That’s not to say that Stanley Tucci, as the murderer, needs any help in creating hatred. He absolutely embodies creepiness and his portrayal is one of the most unsettling performances in recent memory. I would go so far as to say that Tucci alone makes this film worth watching.
It’s a shame that the unsympathetic character is given the most development, though. The mother and father get their angry/crying scenes, but Susie’s dad almost instantly goes into obsessed mode while the mother just leaves. I normally wouldn’t suggest this, but this film needed a better misery scene. The biggest mistake in the character department, however, rests with Susan Sarandon as Susie’s wacky grandma. Now, this is a movie about the murder of a child, yet the filmmakers felt that they should add a montage of Sarandon acting goofy. Watch as grandma messes up the laundry, sets the kitchen on fire, drinks too much, and always smokes! Hilarious, right? Completely out of place is more like it. I felt like I was watching a different movie in that moment.
Scenes like that led me to believe that the screenwriters tried too hard to please fans of the book. I have never read the bestseller that this film is based on, but the out of place moments of this film must be better handled in the book. Maybe that’s not the case, but even if I had gone into this movie with no prior knowledge, I would’ve known that it was an adaptation after that montage. 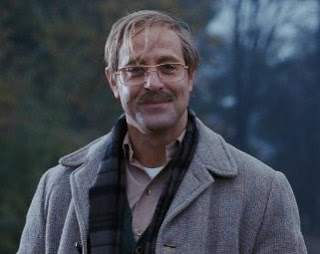 As I mentioned earlier, though, this film does have strong aspects. The scenes involving Tucci were full of tension and they truly made me feel uncomfortable. The visuals are impressive at times, though I was actually expecting them to be a bit better since it was Peter Jackson. Regardless, some images stuck with me, like the giant bottled ships crashing into rocks. And speaking of Jackson, his cameo (a not so subtle shot of him looking through a camera) and references were an amusing touch.
Peter Jackson is a proven director, but he really needs to trim the fat off of his films. I’ve had issues with his films since the multiple endings of The Return of the King and then the bloated King Kong remake. This film isn’t extremely long or anything, but plenty of it could have been cut to tighten the focus. For starters, Jackson could have cut the Sarandon character completely. I believe other characters, like Susie’s sister, could’ve have been cut down as well.
I wanted to see a movie that was only about a father and his daughter and how they both deal with her death. Instead, I got an unfocused film that seemed to randomly focus on different characters. If the filmmakers could’ve seen the strong aspects of The Lovely Bones during production, maybe the film would have turned out better. As it is, the film is mediocre and worth a rental at best.

If you've been reading my reviews at all, then you know I have a soft spot for sci-fi, which is why I'm willing to forgive Pandorum its few transgressions (too dark early in the film, creatures seem like rip offs of the Reavers from "Firefly"/Serenity, etc.) and recommend it as a totally decent horror sci-fi film. It helps that it stars Ben Foster, who is quickly becoming one of my favorite actors and is hardcore sci-fi. By that I mean that it takes place hundreds of years in the future and the entire movie takes place on a spaceship. The action isn't half bad, either. A little frenetic at times, but it does have an interesting look to it. If any of the above sounds good, do yourself a favor and give it a rent.

The Room is not to be taken seriously. This is the film that became famous for its midnight showings (of which multiple celebrities are known to attend) in which fans yell at the screen and throw plastic spoons (because of the framed artwork of cutlery in the film). Simply put, it's one of the worst movies ever made, which makes it extremely enjoyable (kind of like the new The Wicker Man). Characters seem to completely change from scene to scene. There are multiple lengthy, strange sex scenes. For some reason, the characters play what they call "football" at random times (once while wearing tuxedos). Wiseau himself delivers his dialogue in such a strange way you can't help but laugh. I could go on and on, but I suggest you just watch it yourself and enjoy the awfulness.

This is the first of two Sean Connery films that I watched only because of references to other films. In this case, the reference was in Moon. Outland is about a mining colony on a moon of Jupiter that is experiencing a surge of violent deaths. Sean Connery is the new head of security and he has to face off with the general manager of the mine, Peter Boyle. This is one of those films that I probably would have loved if I had seen it when it first came out, but I've seen so many better sci-fi films that came out after this. And Outland just isn't all that memorable. It has its moments, though. It's fun to watch Connery and Boyle square off and the plot was interesting. If you like sci-fi, I'd recommend checking it out on Netflix streaming, it's probably not worth wasting a disc rental on, though.

Part two of my Connery reference twin bill, Zardoz was compared to The Book of Eli in an amusing io9.com article, so I had to check out this post-apocalyptic/sci-fi/crazy film. This film is just plain wacky. If you need proof, just check out a picture of Sean Connery in costume for this one. He looks ridiculous, but that's in keeping with this foolish film. Apparently this film is a cult classic, but I didn't even get that kind of enjoyment out of it. So maybe it's for you, but if you haven't seen it yet, don't make a point to, unless you're just that curious about why Sean Connery would wear such a ridiculous getup.
In the Loop - Written (partially) and directed by Armando Ianucci, starring Tom Hollander, James Gandolfini, and Peter Capaldi - Rated R

In the Loop is the hilarious satire of a joint British-American buildup to war in an unnamed middle eastern country. War in the middle east isn't exactly the funniest topic out there, so this film focuses on how ridiculous the political world is. If you've heard anything about this movie, you've probably heard about Peter Capaldi's hilarious turn as Malcolm Tucker. There's nothing I can write that will add to the mountain of praise he has already received, so I'll just let you know that everything you've heard/read is absolutely correct. In the Loop is definitely one of the funniest films of 2009 and it's one of those great, rapid-fire comedies that you need to watch two or three times to catch all of the jokes. Definitely check this one out. At worst, you'll only find Capaldi to be funny.
Orphan - Directed by Jaume Collet-Serra, starring Vera Farmiga, Peter Sarsgaard, and Isabelle Fuhrman - Rated R

This movie isn't bad or anything, it's just that I am sick of the "evil child" movies. And this one doesn't offer anything groundbreaking. To be honest, I prefer Vera Famiga's other evil kid movie, 2007's Joshua. It's a bit strange that she has made two movies like this in a span of three years. If you like this type of movie, I honestly suggest checking out Joshua instead of Orphan. I will say this for Orphan, though; Isabelle Fuhrman plays evil quite well. Oh, and Peter Sarsgaard is in this and that always helps, though I wish he would start taking some more interesting roles.
Walker - Directed by Alex Cox, starring Ed Harris, Sy Richardson, Xander Berkeley, Marlee Matlin, and Peter Boyle - Rated R (1987)

This film, from the director of Repo Man and Sid and Nancy (two films that I thought were interesting, but didn't like as much as everyone else), is quite weird. From the opening scene set to Joe Strummer's interesting and original score, you know you're in for something quite different from a regular biopic. The movie, made during the Sandinista/Contra ordeal in Nicauragua has a few intentional anachronisms that seem to point out that the movie is about William Walker, but it's also about the (then) current situation. I watched it because the history sounded so interesting. William Walker (an excellent Ed Harris) was an American filibuster who went to Nicauragua for Cornelius Vanderbilt (Peter Boyle) and ended up declaring himself president in 1856. That much is true, and extremely interesting, at that. I imagine weirder parts of the movie might put off some viewers, though. But if you're looking for a cautionary tale about Manifest Destiny, an indictment of U.S. involvement in the Sandinista/Contra situation, and/or a great performance from Ed Harris then, by all means, check out Walker. Or maybe you're like me and you'll want to watch it again just for Strummer's score and the rest of the film is a bonus.
Posted by Eric Harris at 5:33 PM

Email ThisBlogThis!Share to TwitterShare to FacebookShare to Pinterest
Labels: In the Loop, Orphan, Outland, Pandorum, The Lovely Bones, The Room, Walker, Zardoz