"The Book of Eli"

The Evil Kurgan loves the apocalypse. 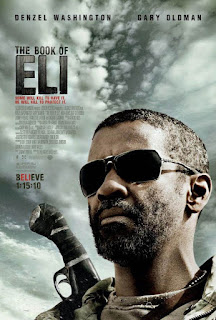 It seems that Hollywood is obsessed with the apocalypse these days. Over the past year I’ve seen Knowing, Terminator: Salvation, The Road, Zombieland, 2012, and now The Book of Eli. Let’s face it, people want to see what might happen if the world ends. Would we turn to cannibalism? Would we loot and pillage? Would we lose our humanity? These questions have been covered by most of these films, but, surprisingly, religion has taken a backseat in the Hollywood apocalypse. To be fair, Knowing had a religious aspect to it, but it was slightly open to interpretation.

The trend of ignoring religion during the end times has changed with The Book of Eli. If you’ve seen the previews, you know that the eponymous book is in fact the Holy Bible. In the film, a war tore a hole in the sky and brought on a gray world (the film nearly looks black and white). The Bible was blamed for this war and all copies of the book were burned. Well, almost all of them. Eli (Denzel Washington) has the last copy and he’s trying to take it west.

Eli walks a scorched earth alone. The road is populated with cannibals, though, waiting to ambush lone walkers. But Eli gets by okay. He’s insanely deadly with a bow and arrow and all manner of guns, but he is an artist with his razor sharp machete. Needless to say, The Book of Eli has a number of brutal action scenes. The action isn’t groundbreaking or anything, but it is entertaining. One shootout in particular is Michael Bay-worthy. The action is vital to the film because the story does start to drag a bit when Eli makes his way to town.

In the town, Eli comes across the ruthless Carnegie (Gary Oldman). Carnegie runs the town with an iron fist (he controls the precious water supply) and he uses his power to send out road crews to search for the last copy of the Bible, in hopes of using it for ill gains, of course. This is where Eli meets Solara (Mila Kunis) who insists on tagging along with Eli.

Solara is meant to be an important character and she is supposed to represent a vital theme in regards to the Bible and how it tells you to lead your life. But I thought this fell flat a bit. I think the film is strong enough with only Denzel Washington and Gary Oldman going head to head.
The flaws in Solara’s character are due to writing, not acting. Kunis does an okay job in the film. She just pales in comparison to heavyweights like Washington and Oldman. Washington has become one of the most dependable actors in Hollywood. You know you’re going to see at least a decent movie if he’s involved. His screen presence is unmatched. Oldman is great as usual, though I would have liked to see more eccentricities in his character. Carnegie, as a character, is kind of plain, but Oldman punches it up a bit. The supporting players aren’t bad in this film, either. Ray Stevenson makes for a decent second-in-command. And Tom Waits and Michael Gambon lighten the mood of the film here and there.

The lightening of the mood is a very refreshing aspect of the film. Most apocalyptic films are deadly serious, which is natural, but movies are meant to be entertaining for the most part and it’s nice to laugh occasionally, even in the face of disaster. Don’t get me wrong, though, The Book of Eli is not a comedy. It just has a couple of moments that provide a laugh or two.

The comedy and the religion are refreshing aspects of the film, but the style of the film isn’t exactly original. I can’t help but compare it to The Road. Both films offer a scorched earth as a setting and the opening scenes of Eli walking alone could almost be confused with footage from 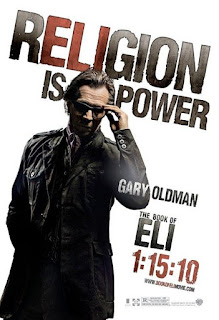 that other apocalyptic film. But your options are a bit limited when it comes to the end of the world. There’s bound to be some overlap. It may not be the freshest look in film, but it does look great and the Hughes Brothers (the directing duo) create some beautiful shots that match up to the powerful score.

The Book of Eli offers some elements that I found amusing in the crowded post-apocalyptic genre. First off, it’s basically a western. You have shootouts in the middle of town, saloons populated with grungy highwaymen, and even a shot or two that would fit in perfectly in an old Clint Eastwood western. Second, everyone gets to wear sunglasses, and it’s nice to see that people still like to look cool after the end of the world. To be fair, though, the sunglasses are important since the sun is particularly blinding after the war. Finally, the film has an interesting take on the cannibal issue. According to this film, if you eat too much human meat, you get the shakes and basically turn into a junkie. I thought it was interesting to add a physical reason to avoid cannibalism in addition to the moral complications.

The story of this film really worked for me. I was honestly interested throughout the film. The action kept things exciting, but I wasn’t sitting there waiting for the next action scene. First time screenwriter Gary Whitta has created an interesting debut; it’s not perfect or anything (as I said earlier, Solara’s character needed some work), but it should keep your attention, which is more than you can say for a lot of films these days. Some people might be turned away from the Christian focus of the film, though. The film makes the Bible the only book that matters, not the Torah, the Koran, the Talmud, etc. That might rub non-Christians the wrong way, but I think the film offers enough for people to get past that. For instance, there is a plot element that will make you want to watch the film at least one more time no matter what your religious affiliation is. The writing overcomes any controversial elements and the direction makes it interesting.

The Book of Eli isn’t a groundbreaking post-apocalyptic film, but it is certainly a worthy addition, and an entertaining one at that. It might even make you think a bit and you’ll certainly have plenty to talk about once it’s over, and that alone makes it worth watching.
Posted by Eric Harris at 3:51 PM