The Evil Kurgan is a Mel Gibson fan. 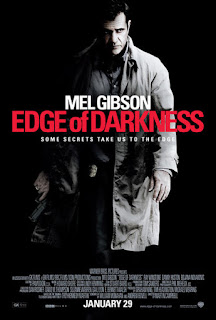 Edge of Darkness marks the first time Mel Gibson has starred in a film for nearly eight years. It’s a shame Mel waited this long, because he’s still got it. Maybe you feel differently about him after all the controversy of the past few years. If his remarks or actions made you hate him, this film isn’t going to bring you back on his side. If, like me, you ignore controversy and just watch a movie, then you’ll get a nostalgic feeling while watching Edge of Darkness and you’ll wish that Mel never took a break.
The film starts off simply enough. Boston police detective Tom Craven (Gibson) picks up his daughter Emma (Bojana Novakovic) from the train station and they head home. They’re not home for long when Emma is viciously gunned down on Tom’s front porch. At first Craven thinks he was the target and Emma was just collateral damage. It’s a bit more complicated than that and Craven ends up going on a mission involving shady government operatives and privatized military companies (PMCs).
I’ll leave the story at that. Just know that Mel Gibson doesn’t react well to the death of his daughter. Some people have tried to categorize this as Taken with Mel Gibson. While there are some basic similarities, the two films are quite different. And Edge of Darkness is a better film. It’s also a more complicated film. The government operative and PMCs might have you scratching your head. But if you pay close attention, the story shouldn’t lose you.
The slightly complex story makes this a film that is more about talking than fighting. Sure, you get a few excellent scenes with Gibson laying down some vengeance, but you see him talking much more often. This is a thriller in the tradition of Gibson’s mid-90’s work, when a film didn’t need constant violence to be entertaining. In other words, this is a film for adults or people with attention spans longer than one minute. That’s not to say this is a boring film, though. There is some extreme violence in it, it’s just not constant. I believe that director Martin Campbell (Casino Royale) took a page from films like A History of Violence and Inglourious Basterds. Those two films show that violence is most brutal and effective when it is set up very slowly and then happens in the blink of an eye.
The violence sticks out a bit, but this film works best in dialogue. The scenes with Craven and shady hit man Jedburgh (Ray Winstone) were my favorite moments. Winstone has a quiet animosity in his voice that adds tension to every scene. 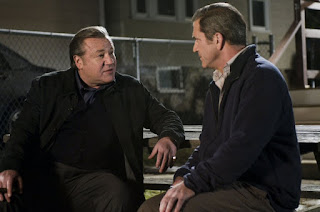 It also helps that his character, a hit man who is possibly developing a conscious, is just as interesting, if not more, than Craven. Craven’s story arc is quite simple: find the people who killed my daughter and return the favor. Jedburgh, on the other hand, is trying to decide what his mission is throughout the film. The audience doesn’t know whether or not to root for him, which makes him very interesting. Jedburgh’s character also allows for some much needed comic relief like when Craven ends one encounter with the line, “By the way, thanks for not killing me.”
Winstone is great, but this is still Gibson’s film. No one sells the loss of a child like Gibson. He’s one of the few actors who can pull off an anguished yell and not provoke laughter. But better than that, he shows such convincing anger that it transfers off the screen. I felt angry right with him throughout the movie and as he exacted revenge I felt like cheering him on. This is nothing new for Gibson, though. Just look at films like Braveheart and The Patriot. It’s nearly impossible not to be on Mel’s side in these films.
Gibson’s performance always makes a villain better, too. When he gets you on his side, you start to really hate the villain of the film. And even though Jack Bennett (Danny Huston) isn’t a very memorable antagonist, you still get a decent sense of hatred for him. For the record, Huston does a fine job as Bennett and it’s always good to see him in higher profile releases like this. It’s just that the character isn’t particularly interesting.
The villain isn’t the greatest and the film itself will not likely be remembered as one of Gibson’s best, but Edge of Darkness is definitely a worthy film for Mel Gibson’s return to starring roles. I just hope that he keeps it up because seven and a half years is far too long to go without hearing Gibson say things like, “You had better decide whether you’re hangin’ on the cross, or bangin’ in the nails” with utterly convincing ferocity. So just forget about Mel Gibson the man if you have to and let Mel Gibson the actor take you on a vengeful and entertaining trip.
Posted by Eric Harris at 7:06 PM