This fun take on Holmes and Watson deserves a Kurgan. 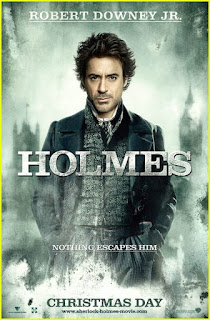 Who knew Sherlock Holmes was so cool? If you’re like me, then the idea that comes to mind when you hear the famous detective’s name is that of a middle-aged man with a funny hat, a pipe, and an uncanny ability to solve complicated crimes by simply paying close attention to every detail. That doesn’t mean that director Guy Ritchie’s new version of Holmes is an unfaithful adaptation of the beloved Sir Arthur Conan Doyle creation. After doing some research (nothing major, just a quick read through of Sherlock’s Wikipedia page), I found that Holmes was an accomplished bare knuckle boxer and he had an eccentric personality. It’s just that Ritchie and his many screenwriters (five are credited) focused on the fighting and the eccentricity. That’s not to say that the deductive reasoning is ignored, however.

Sherlock Holmes is still all about an elaborate crime that Sherlock (Robert Downey, Jr.) and his ever faithful sidekick, Dr. Watson (Jude Law), must solve. Lord Blackwood (the continually impressive Mark Strong) has just been caught dabbling in the dark arts and has been sentenced to hang. Everything seems to be going smoothly. He is executed and Watson confirms his death, but the next day Blackwood is alive and plotting some major changes in England.

The story is interesting and nicely action packed, but what makes or breaks this film is the different take on the characters. Robert Downey, Jr. is very entertaining as the quick witted Holmes. His back and forth with Watson make for the most enjoyable moments in the film. The duo makes a first rate odd couple and the filmmakers made a wise choice by throwing us in the middle of their partnership rather than the beginning. It would have been boring to see yet another origin story about an already well-known set of characters. The pacing of the film actually plays like a sequel. It assumes we are familiar with the characters and just throws you right into a new adventure.

Back to the acting: Downey is funny and all, but his delivery takes some getting used to. His rapid fire delivery works great in other films, but he seems to be mumbling at times in this film and the British accent doesn’t help, either. It was only an issue for me early in the film, though; by the end, I was able to understand all of his lines. Surprisingly, I found Jude Law to be the most entertaining member of the cast. He’s turned in a number of quality roles over the years, but he’s rarely had the chance to be truly funny. He’s not funny in the traditional sense, i.e. he doesn’t have gags or tell jokes. His humor comes from simply reacting to Holmes’s more erratic behavior. Law’s slightly feigned disgust with Holmes is hilarious and what could be a boring, plain scene becomes an amusing moment in the film.

It’s not all witty banter, though. Holmes and Watson see plenty of action; big budget action. A lot of it is played for laughs (like Holmes’s showdown with a giant) and that is for the best. Action set pieces are for movies like Transformers. Ritchie showcases his action in the few fight scenes 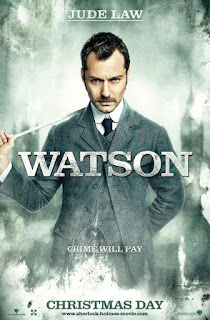 and a slow motion explosion scene. I mention the slow motion because that’s been an aspect of most of Ritchie’s films, notably the boxing scenes in Snatch. I’m kind of a sucker for his use of slow motion so I loved every detailed second of the scenes.

A Guy Ritchie film is not only marked by his use of slow motion, though. This may be Ritchie’s most mainstream film to date, but he still manages to put some style in there, though it’s never overbearing. I don’t think that Ritchie necessarily compromised his style of filmmaking here or anything, I just think that he and the screenwriters knew what a Sherlock Holmes film should be like. The audience doesn’t need sensory overload, or quick cuts, or long sequences set to catchy music. The audience for this film should be expecting an elaborate crime in which small clues are used to solve it and that is what provides the most pleasing aspect of the film.

When things are explained by Holmes while everyone else is clueless, it doesn’t seem forced or ridiculous (at least it doesn’t seem ridiculous in the movie world). In other words, you shouldn’t come away feeling cheated by any explanation. I thought the film covered all of its bases and if you pay close attention, you can play detective as you watch. When Holmes is at a crime scene, scouring the evidence, you should keep your eyes peeled. Like any interesting work, there is a reason for everything that is shown on the screen. Maybe you’ll be able to piece some things together, and maybe you’ll need Holmes to explain it all to you. Either way, you’ll be glad you spent your time on a case with Sherlock Holmes.
Posted by Eric Harris at 9:54 PM