It's very fitting that I can give this movie a Bardem-worthy Chigurh. 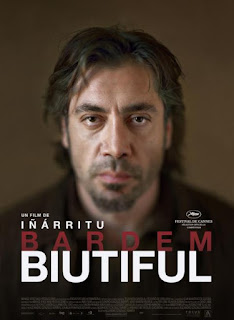 Iñárittu (21 Grams, Babel, Amores Perros), is not a pretty film. The film, which is mainly about death, is gritty in the best sense of the word. The world of the film is lived in and realistic, even though the film itself has a supernatural undertone. It’s a tough film to sit though, but it is ultimately very rewarding.

Consider the above paragraph the full review if you want to go into this one fresh, which I highly advise. This isn’t a big twist ending kind of movie or anything, but if you only have a vague idea of what the film is about it will most likely be a much more rewarding experience. The rest of the review won’t be filled with spoilers or anything, but it will spoil the supernatural element, so be warned.

Biutiful is about Uxbal (Javier Bardem), a single father who is about to die of cancer. He has to deal with an estranged wife, dealings with illegal immigrants, and the fact that he can talk with the recently deceased. Yes, you read that last part right. Don’t be alarmed, though, this is not a Spanish version of The Sixth Sense. The supernatural element is extremely toned down, but the issue of death in general certainly is not.

Death is in Bardem’s eyes throughout this entire film. He gives a truly understated performance (it was great to see him get an Oscar nomination for Best Actor this week). Much of the film focuses on Bardem’s facial expressions and you can see such desperation in his face. It’s a very sad performance that will stick with you after the credits roll.

When the camera isn’t focused on Bardem’s face, there are some interesting things going on. A careful viewer is rewarded with very slight visual effects (reflections, shadows, etc.) that make the film a bit unsettling at times. Unsettling is a good thing when the film in question is about death. If you miss out on those details, the film may be a bit too slow and languorous; so make sure you focus on this one.

There are strange audio aspects of this film, as well. The soundtrack is a bit different here and there, but that’s not it, exactly. The sound design of the film (usually something that doesn’t draw attention) is a bit odd. When characters hug, it sounds like they are wearing microphones. But you can also hear their heartbeats. It’s an effective use of sound. There are many moments that stick out in this film because of sound and they work to develop Uxbal’s character. Uxbal is all about order and discipline at the dinner table, that’s obvious from how he reacts to his son making too much noise as he eats. But the sound puts you in Uxbal’s shoes. The grating sounds of a fork on a plate and a table leg being kicked are amplified to the point of annoyance. The entire film shows Uxbal’s perspective in ways like that and it ends up being very effective.

Biutiful does have its faults, though. At two and a half hours it runs a bit long. This wouldn’t be an issue if the film maintained focus on Uxbal. But Iñárittu couldn’t resist adding more storylines. The subplot with the Chinese couple could’ve been left on the cutting room floor. The characters are needed for the story to build Uxbal’s character and to show why he needs redemption, but there was no need to follow their story when Uxbal wasn’t around. This is just a minor problem; though the film would have been better if it had been limited to two hours.

Biutiful is an interesting film that leaves the viewer with plenty to think about. It won’t hit you over the head with a message or strong visuals, but if you pay close attention to it you will find it very deep and possibly moving. In a cinematic world that seems to be obsessed with astounding visuals and straightforward messages, it’s nice to see a low-key film like Biutiful.

Just wanted to point out the interesting things I spotted during my viewing:

Uxbal's reflection when he bends over to pick something up in front of a door doesn't move, even though he backs away into the street.

The shadow of the fork Uxbal uses when he gets home from the nightclub is a bit behind (or ahead?) of the actual fork's movement, though this one is fairly obvious.

The butterflies on the ceiling lead to some speculation of their meaning. There are plenty of theories out there, depending on what culture you belong to. Either way, it's something to talk about.
Posted by Eric Harris at 4:54 PM