When Meet the Parents came out back in 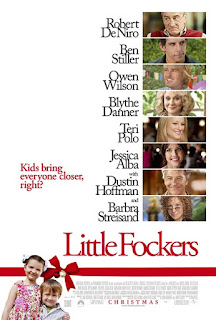 2000, it was a surprisingly funny comedy with the payoff of a main character having the name Focker. Then came 2004’s Meet the Fockers, which was decently funny, though the Focker joke was wearing thin. Now with Little Fockers the question is, “Do we need more jokes about a last name that sounds like an expletive?” Well, not really, but Little Fockers is a harmless enough comedy to sit through.

The third film of the franchise deals with Greg and Pam Focker (Ben Stiller and Teri Polo) dealing with marriage and young children. They worry about keeping their relationship fresh while also worrying about how to properly raise their children. Of course, things get much more complicated as their parents get involved, especially Pam’s father, Jack Byrnes (Robert De Niro). The added aspect this time around is that Jack has lost faith in a different son-in-law and is now looking to Greg to be the patriarch of the family…or as Jack puts it: the “Godfocker” (shudder).

The problem with this film is that it takes the kitchen sink approach to comedy sequels: throw in as many returning characters as possible…and then add a few new ones to top it all off! It’s just too much. The dynamic of the original film is enough, why mess with it? The awkward conversations between Ben Stiller and Robert De Niro are what made the first two films enjoyable. There are still a few of these, but they get squeezed out of the film to make room for outrageous visual gags (puke and erection stabbing) and needless co-stars (this film didn’t need Laura Dern, Jessica Alba, or Harvey Keitel added to it). The first movie was memorable and funny for its more random moments (“Mums” champagne and an overly lacquered altar carved from one piece of wood). This film has no room for things like that.

The Stiller/De Niro moments are still funny, though. And those, along with a few other aspects, make Little Fockers passable. One of the other aspects is Owen Wilson. His ridiculous character, the overly perfect and rich ex-boyfriend, is still amusing in his over-the-top proclamations and gestures. But the funny elements don’t outweigh the mundane in this comedy.

It can’t be stressed enough that this movie has too many characters in it. Here’s the cast list: Stiller, De Niro, Danner, Polo, Streisand, Hoffman, Wilson, Alba, Keitel, and Dern. This isn’t a Robert Altman film, for God’s sakes. It’s not that these actors are bad or even unfunny. The problem is that none of them have the screen time to make a good impression. The movie is just a mess. It could have been easily solved by scaling back this cast.

Streisand and Hoffman were zany enough to be slightly amusing the last time around, but they should have been cut from this one. Apparently Hoffman felt this too as he initially turned down the role. Unfortunately a deal was struck and some scenes of him dancing the flamenco like an idiot were crammed in. Keitel appears as a conniving contractor and his few scenes showed promise but then he utterly disappeared from the film. It is quite possible that there is a more focused, funny film that was left on the cutting room floor.

Little Fockers also suffers from repetition. Obviously the name joke is repeated, but the plot is as well. Who would have guessed it? Ben Stiller gains De Niro’s trust only to start acting suspicious seconds later. Lie upon lie stacks up leading to a ridiculous and lame conclusion. Sure, no one expects a great story from a movie like this, but it’s hard to ignore such shortcomings when the laughs are so sparse.

Comedy is subjective, though. My audience laughed consistently (well, consistently more than I did, anyway). Some people still get a kick out of the use of the word Focker, particularly when De Niro says it with such degradation. That’s the thing with the kitchen sink approach; at least some of it ends up being humorous. It depends on the viewer as to how much of it is humorous, though.

Judging Little Fockers from a comedic filmmaking standpoint, it’s easy to come to the conclusion that it just isn’t a very good movie. Overused gags, disappearing characters, needless subplots, petty gross out humor, these things are too much to ignore. But if you are able to look past the faults more power to you. There are worse comedies out there. But even the fans of this latest installment have to agree that the series has run its course. Here’s hoping that these Little Fockers are the last Fockers we ever have to see.

Was it really necessary to add the plotline involving erectile dysfunction pills? Even the most boring of people consider Viagra jokes lame these days.

To immediately contradict my previous comment, the boner stabbing scene did make me laugh for one reason: that crude drawing Stiller's kid makes of the scenes was pretty funny. Well, it was to me, anyway. Subjective! Remember?

Further contradicting: I am sick of the Focker stuff, but it was funny when De Niro was saying "Focker" into the oxygen mask near the end and the paramedics asked why he was cursing at them.

This movie really made me want to watch the original...I think I'll go do that right now.
Posted by Eric Harris at 9:46 PM