"I Love You Phillip Morris"

I Love You Phillip Morris - Written and Directed by Glenn Ficarra and John Requa, based on a book by Steve McVicker, starring Jim Carrey, Ewan McGregor, and Leslie Mann - Rated R

Much of the humor of this film might be considered dark, but the Evil Kurgan only enjoys dark comedy.


I Love You Phillip Morris has had a 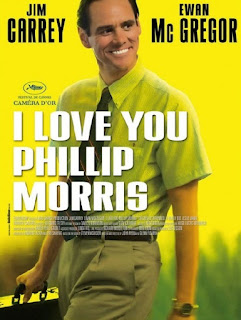 shaky road to the big screen (and odds are you haven’t had a chance to see it, even on the big screen). The true story about gay con man Steven Russell (Jim Carrey) and his intense love for his boyfriend Phillip Morris (Ewan McGregor) isn’t the most marketable of films, though it is ultimately a quick paced, funny movie. Once you watch it, you’ll wonder why this was kept off the big screen for so long. Sure, homosexuality certainly isn’t accepted by the entire population, but there have been wide releases with gay main characters in recent years; it just doesn’t make sense why this movie has been put off.
The movie can be a bit “in your face” but that adds to the humor of it all. The film never tries to be exploitative and it’s not really about homosexuality at all. In fact, the homosexuality is used to good comedic effect. Jim Carrey’s prison walkthrough with a new inmate stands out and the matter of fact way the leads deal with the gay relationship is often funny. The phallic imagery may have been a bit forced when it cropped up here and there, but for the most part, this is a movie about a con man.
Con man movies can be polarizing, though. If they get bogged down in the rules of the con, they can become so esoteric that you almost need to take notes to keep up. Then there are the movies that spend too much time explaining how each con works. Phillip Morris rides the line in between those two extremes. The film moves at such a brisk pace that it’s hard to question how the cons work, it’s just accepted.
It helps that Jim Carrey makes a very convincing con man. He exudes such confidence that it is completely believable that he could fake his way into so many different situations. Those situations lead to so many different places it’s hard to summarize the plot other than to say that it is about a gay con man desperately trying to stay with his lover. But that description doesn’t do the light hearted tone of the film justice.
The film may have failed with less able actors in the lead roles. Carrey gives his best performance in years. He is funny, sincere, and realistic. When he is given the right roles (such as Truman in The Truman Show) Carrey proves to be more than just a comedic buffoon. McGregor is channeling his character from Big Fish in this film (the main difference being his sexuality) and that is not a bad thing. The hopeful and playful innocence of his character proves to be an interesting foil to Carrey’s dishonest con man.
First time directors Glenn Ficarra and John Requa don’t try anything too daring with the camera in Phillip Morris, but it is still an impressive debut effort. They know that momentum is everything in a film like this and they just let the film run. The writer-directors must have known that this film would have suffered immensely had they slowed down to focus on the “how” of the film.
The film’s pacing works for the most part but it may push the film too far into the fantastical realm for some. Sure, the film starts with the claim that “this really happened” and is backed up with “it really did.” That sets up the idea that it is an unbelievable story. But that doesn’t necessarily excuse the film from being over the top at times. Still, it’s an easy film to excuse because in the end it is very fun. And if you research it a bit, it turns out that most of Russell’s outlandish escape attempts actually happened.
This is a film after all, that handles multiple suicide attempts with humor. The homosexuality might be overt at times, but its willingness to add humor to potentially dark situations excuses any gimmicky qualities of the film.
Phillip Morris is also interesting in that it is really a character study of Steven Russell. It’s hard to pinpoint his motivations and even his voiceover doesn’t give insight into his thought process because he doesn’t seem too sure himself. One thing is for sure, though, it’s all enjoyable to watch since the tone is so light. That is what makes this film so interesting in the end; it could’ve been such a dark, potentially depressing film but it ends up as a comedy and it’s a better film because of it.
If you can track it down (it shouldn’t be all that long before it’s on DVD and Blu-ray) you should check out Phillip Morris. Yeah, it’s Jim Carrey’s “gay” movie, but not really. The film rarely trails off into gimmicky territory, but it consistently stays in the entertaining realm. Some dark things happen, but the film never asks you to worry about it. I Love You Phillip Morris only asks you to laugh at the absurdity of it all, and it’s easy to do so.

Random Thoughts
I loved the evolution of the lawyer joke. It always amuses me when someone butchers the retelling of a joke in real life and this film recreates that in a fun little montage.
The film can be categorized as many things, but it stuck out to me that the corporate business man con scenes were very much reminiscent of The Informant! That isn't a bad thing at all, by the way. Just an observation.
Posted by Eric Harris at 5:27 PM