"Season of the Witch"

* I know this one is a bit late, but I didn't feel like watching the Ashton Kutcher/Natalie Portman romcom and The Way Back wasn't playing anywhere near me, so here it is, my review of Nicolas Cage's latest.
Season of the Witch - Directed by Dominic Sena, written by Bragi F. Schut, starring Nicolas Cage, Ron Perlman, and Claire Foy - Rated PG-13

I wish I could give this one The Wind (from The Happening), but it isn't all that bad, which is too bad.

Certain people (this critic included) have expectations of Nicolas Cage. Cage is capable of 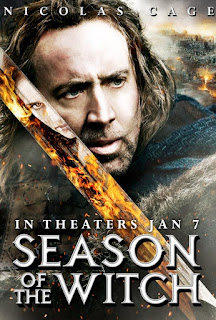 inoffensive, popcorn entertainment (the National Treasure movies), dramatic, compelling stories (The Weatherman), plain, forgettable action movies (Windtalkers, Next), and, most importantly, completely insane films (Bad Lieutenant, The Wicker Man). His insane performances are by far the most fun films in his filmography. Unfortunately, Season of the Witch does not feature one of those performances. Witch isn’t so bad it’s good, and it’s not really all that bad in general…it’s just there, and somehow that makes it a very disappointing film.
Season of the Witch isn’t just about witchcraft. It’s also about the Crusades, the Black Death, and the role of religion in one’s life. It’s kind of like The Seventh Seal, but not nearly as thought provoking. Consider it the B-movie version of Ingmar Bergman’s classic, though to call this a B-movie is to imply it’s a fun film, and it most certainly isn’t. A bit of credit is due for making the attempt to include issues of God into such a film; the problem is that it’s been done so many times before, and in relation to the exact same events. Just watch The Seventh Seal or the director’s cut of Kingdom of Heaven if you want entertainment and intellect.
The basic outline of Witch involves two AWOL crusaders, Behmen (Cage) and Felson (Ron Perlman), who leave their crusade after being involved in the slaughter of women and children. This is the first instance of questioning God since the Crusades were carried out in His name. Then the two come across a plague-stricken area. Cue the next questioning of God. They learn that the plague may be the work of a witch that the church has captured. Behmen and Felson agree to take the witch to a monastery so she can stand trial. Then the film delves into a road trip movie with some very dark undertones.
However you go about watching Season of the Witch, don’t do it with a historically critical eye. The eras are messed up (the Crusades had ended by the time the Black Death rolled around) and it is all oversimplified as Cage and Perlman jump from one battle to the next. The biggest problem with the Crusades stuff is how bland the action is. The battles were just boring and the CG was spotty at best for the larger battles. Aside from the CG, though, this movie looks pretty great. The locations and production design more than make up for the weak CG.
This film could have been somewhat of a guilty pleasure had Cage insisted on going crazy. He never truly freaks out in Season of the Witch. There is a line or two that is amusing, but Wicker Man this is not. Cage is sleepwalking in this one. Perlman was a bright spot, though. He seemed aware of how weak the movie was and infused some cheesy humor into it. Maybe he was aware of how out of place he and Cage looked wearing that armor and charging into battle.
If only more of the filmmakers had been in on the B-movie qualities present. Season of the Witch could have turned into something at least memorable. As it is, this is destined to disappear with other Cage misfires like Bangkok Dangerous. It’s a real shame, too. This film features witches, demons, holy war, zombies, possessed wolves, etc. All that stuff thrown together could be a gold mine for B-movie fun. This film is woefully serious, though.
It may be odd to wish that a movie was really bad as opposed to just plain bad, but it’s all about enjoyment. If you’ve seen a really bad Nicolas Cage movie and actually liked it despite the awfulness, then you’re probably chomping at the bit for more craziness. Who wants a movie that will be all but forgotten by next month (hell, this review is so late some of you may have already forgotten the film)? Season of the Witch doesn’t suck out loud, but it would have been great if it had.

Random Thoughts
Stephen graham is kind of wasted as one of the travellers, though it was good to seem him in something slightly high profile. Thankfully, he is also in "Boardwalk Empire" so most people are seeing him perform in something worthwhile.
Christopher Lee is kind of a random addition as a plague ridden cardinal. He had a nice little scene, thought they were a tad hardcore with the plague effects on his face, though.
Speaking of plague, I did like how they included some historical elements like the practice of blood letting and flagellants.
I dug the cheesiness of this line: "We're going to need more holy water." It had a Jaws vibe to it that I liked.
Nicolas Cage doesn't get all crazy, but he does get to yell out, "Cut off their heads!" It's not much, but you have to take what you can get with this one.
Posted by Eric Harris at 3:49 PM