*January is a notoriously weak month at the theatre. I didn't bother with Season of the Witch (though I may check it out in the coming days since I am a huge Cage fan) because it wasn't playing at my local theatre and I didn't feel that it warranted the trip to Owensboro, KY. I'm facing the hard truth of life in Cannelton, hours away from any of the screenings I get invited to. But I do have some screeners left that I haven't reviewed yet. After this review of Casino Jack (which should see a wider release in the next month or so after opening in a handful of theatres for awards consideration back in December), I will review I Love You, Phillip Morris, Biutiful, and The Company Men. All of which should have at least a limited release soon.

The point of all this is that I won't be able to review the big releases (like The Green Hornet this weekend) until I can make it to the theatre after its release. No more reviews published the day the film comes out...

"I'm Jack Abramoff and I work out every day!"

Jack Abramoff is a character. It just so happens he 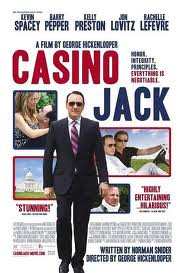 is an actual person as well. Abramoff was a hotshot lobbyist for years in Washington, D.C. until his world came crumbling down. A rise and fall in D.C. hardly makes a compelling character, but Abramoff had enough idiosyncrasies to warrant not just a documentary (the informative and entertaining Casino Jack and the United States of Money), but also a fictionalized retelling of his story. Unfortunately, it turns out that the documentary was good enough for his story. This film just seems like overkill.

The story of Jack Abramoff is interesting. He was a lobbyist, mainly for Native American casinos (hence the nickname), and was eventually brought down due to extreme corruption and betrayal. It is a story meant to be dramatized: a lobbyist who abuses tax laws to keep sweatshops open, deals with mafia-types, is obsessed with movies (he actually produced a couple Dolph Lundgren movies), and seems to always need to prove himself. It all somehow ends up being a bit boring and pointless.

Casino Jack is not a complete exercise in futility, though. Abramoff is portrayed by Kevin Spacey and it is a great performance. The film begins with Spacey giving himself a pep talk in a bathroom mirror. It’s strange but mesmerizing at the same time. As Spacey says emphatically, “I’m Jack Abramoff and I work out every day!” you realize that a determined performance is taking place. Spacey’s outbursts and seemingly random comments make this movie worth watching, but in the long run it’s not enough to make Casino Jack a great film.

It can’t be stressed enough that the documentary about Abramoff contains all the information you could ever want from this story. It’s very strange that both the documentary and the dramatization would come out so close together. Even stranger is the fact that director George Hickenlooper, primarily a documentarian (and a gifted one at that), would be the filmmaker behind the dramatization. (As a side note, Hickenlooper’s untimely death in October is doubly saddening because of his promise as a filmmaker.)

The film’s downfall isn’t that the documentary preceded it; it’s the fact that the documentary does a much better job at explaining the circumstances of the situation and the downfall. A dramatization is never really meant to provide the real story, anyway, but Casino Jack fails at being entertaining as well (aside from Spacey, that is). It’s not so much the characters that surround Spacey that make things boring; it’s the uninspired casting. There’s Barry Pepper as the young hotshot. Fine, but how many times do we have to see Pepper in that role? Then you have the sleazy businessman played by Jon Lovitz. Lovitz is usually a comedian, but how many times has he played a disgusting sleazebag? It’s a boring combination of clichéd characters and typecast actors. To be clear, Pepper and Lovitz both do fine jobs here, it’s just that they could play these roles in their sleep.

Casino Jack could be inoffensive in its clichés held together by a great Spacey performance, but oddly enough, the film’s score makes the film nearly unbearable. The old saying is that a good score is never noticed. That only rings true when a film needs a plain score. Casino Jack needed a plain score. What it got was an insanely annoying and far too loud score that sticks out like a sore thumb. It cannot be described in words; you must hear it to understand how annoying it is. It was as if the score was trying to force a lighthearted tone that doesn’t exist. The film would be much better off with a soundtrack and nothing else.

Perhaps the biggest problem with Casino Jack, however, is the fact that it really doesn’t have much to say. That isn’t necessarily a problem for most films, but if the film deals with political corruption and lobbyists, it is pretty much required that there is a message about why things went the way they did or at least a warning about how to keep them from happening again. The film tries to be a character study about Abramoff, but lacks the focus to make that case. Kevin Spacey is the only aspect of the film that warrants any close attention.

If you’re looking for an inside story concerning Abramoff and Tom DeLay (among other politicians), then check out the documentary. If all you want is an above average Kevin Spacey performance, then check out Casino Jack. Be warned, you won’t learn much and you may want to cover your ears every now and then.
Posted by Eric Harris at 8:42 PM