This one has Bruce Banner's dad written all over it.

Ron Howard has not done it again. The director took another hugely popular Dan Brown novel and allowed it to become a hectic mess. When Howard made The Da Vinci Code back in 2006, the expectations were huge. It was based on a hugely popular novel and it had Tom Hanks in the main role as Robert Langdon. But somewhere it all went wrong. Characters were changed and 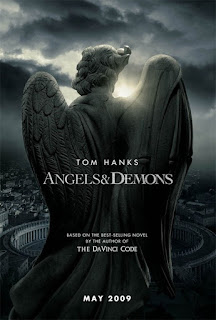 plot points dropped completely in lieu of more action/chase scenes. And Tom Hanks had one of the dumbest looking haircuts in recent movie history. Sadly, the only major change with Angels & Demons is Hanks’ hair.
Apart from a new haircut, Robert Langdon (Hanks) is the same symbologist who cracked the Da Vinci code. This time he’s contacted by the Vatican to try and solve the mystery of the Illuminati, a supposedly dead secret society which is waging war on Catholicism. This war is fought through the kidnapping of four cardinals who are the favorites to succeed the recently deceased pope. The group threatens to kill all four of the cardinals publicly and, to top it all off, they plan to destroy Vatican City with some stolen anti-matter. That summary may seem overly complicated and more suited for a novel rather than a movie and that is exactly what’s wrong with this film.
A book to movie adaptation is a tricky situation. Some stuff just has to be cut (especially from a lengthy book like Angels & Demons) and changes must be made to simplify and shorten the film version. But I think Dan Brown’s Langdon novels are just too complex and vast to translate to film, no matter what changes are made. The changes in this film, though, are certainly mistakes. There is almost no benefit from the changes to the characters. There are two major relationships that are removed from the novel which leave plot points feeling completely empty. It also doesn’t help that this movie missed the point that the book made concerning science vs. religion. The movie is too quick to get to another dead body when it should start off a bit slower and completely explain the rift between science and religion and consider the possibility of the two groups working together for a change.
Ron Howard does his best to cover up these mistakes with touches of style and music. Some of it works. The sequence with the large hadron collider near the beginning looks great and the visuals in the final scenes are impressive. It also helps that there are many great and famous locations which instantly make some scenes more interesting visually.
What doesn’t work, however, is the score. There are times when the music is so loud and overbearing that it becomes a distraction. The score is used to try to create suspense when it is 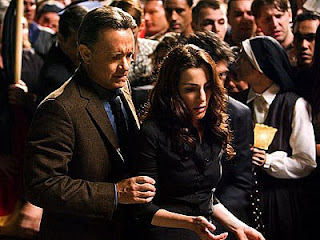 simply not there. It almost seems like the actors can hear the music themselves at times because they will be calm about something, but when the music is cued, they start running and yelling. Music can add suspense, but it cannot create it. The only thing the music did for me was make me appreciate the few scenes not accompanied by a score. The most suspenseful scene in the film (it features someone being locked in) has no music. If Howard would have realized that an audience doesn’t have to be told how to feel through music, then this film wouldn’t have seemed so messy and rushed.
Angels & Demons might work as a novel, but it’s far too loud and hectic as a film. So if you want a suspenseful story about science and religion, read the book. If you want to hear blaring suspense music set to a weak plot, watch the movie.

**Once again, this one might be in the Perry County News, so here are some of my expanded thoughts on this mediocre movie.
I didn't really comment on the acting above because it was all so basic. Also, it all moves so fast that there isn't time for an actor to give any kind of memorable performance. So it isn't bad or anything, it just is.
The main thing I wanted to write about, though, is the end and the changes from the book to the movie. So this is obviously going to be filled with SPOILERS FOR BOTH THE MOVIE AND THE NOVEL. So I considered the main idea of the novel to be the battle between science and religion and how the groups could possibly work together. With this plotline, it was more about the church changing their ways rather than science slowing down for religion (which is how it is in the movie, Ewan McGregor's character 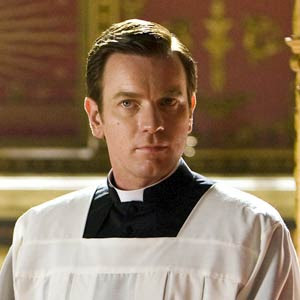 even states that science should slow down). Part of the church changing concerned their openness to the rest of the world. Church leaders in the book discussed the possibility of embracing science and embracing the media. This is mentioned slightly in the movie, but it isn't focused on. In the book, a BBC journalist is a minor character and that journalist is allowed to follow the main characters around to the end. In the end, when corruption has been discovered along with murder, the media is there to share it with the world; the point being that the world would be shown the troubles the church has gone through, and would renew their faith not only because they witnessed what the church has survived, but also because they were now in a new era free of cover-ups and lies. But guess what happens in the movie? The journalist character is gone, and everything the church goes through is covered up and hidden from the public. The pope wasn't murdered, he just died. Those cardinals weren't killed, they died in a fire. And that guy who masterminded the entire thing? He's on the fasttrack to sainthood. Seriously? This is the hopeful, changed church at the end? They survived major problems, but they still lie through their teeth to their own believers.
Finally, I want to expand on the deleted relationships I mentioned in the main review. Once again, major SPOILER here. The recently deceased pope is McGregor's adopted father in the book and movie, but it is revealed in the book that he is his actual father (through artificial insemination), which makes his murder at McGregor's hands even more devastating. Another father issue: Ayelet Zurer (Langdon's gal pal in this one) plays the scientist who helped create the antimatter. In the movie, her partner is just another scientist. In the book, it's her father. She might have been able to show some more emotion if she was dealing with the death of her father in the movie, but instead she's just along for the emotionless ride.

Next: Wednesday I'll write about John Carpenter and for Sunday I'll have a Terminator: Salvation review
Posted by Eric Harris at 6:56 PM