“I’m going to put a price on your head so big that when you look in the mirror, your reflection is gonna want to shoot you in the face!”

Hit man movies have become a genre unto themselves and 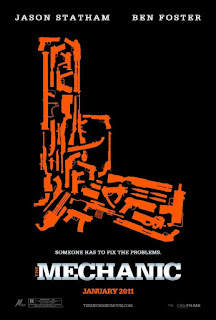 many of them have tended to be about introverted hit men (like 2010’s The American). The Mechanic attempts a bit of introversion, but, thankfully, it fails and ends up being a fun action movie.

The Mechanic is actually a remake of a Charles Bronson film from the 70s and it is a bit more understated than this update, though it has its action moments as well. That movie has its fans, but it is very much a 70s movie and it’s not unreasonable to give it an update. The original film, and this new version, is about experienced hit man Arthur Bishop teaching the hit man trade to his mentor’s son, Steve McKenna.

Jason Statham replaces Bronson in the Bishop role with Ben Foster taking over the Steve McKenna part. There is no need to go into a lengthy plot synopsis with this one. Just know that The Mechanic is essentially a mentor movie, with Statham showing Foster the ropes of the professional killer industry.

Here’s the twist, though: the movie sets up the rule that most kills should be controlled and discreet then shoots that rule in the head and runs it over with a car for good measure. There is almost nothing professional about the kills in this movie; it is one screw up after another. This is not a condemnation, though. Hit man movies can be boring at times because the hit men are portrayed as these perfect killing machines that never mess up. In The Mechanic, Murphy’s Law is in full effect. Admit it, a hit man movie is much more entertaining when the plan falls apart and the killer(s) have to just wing it.

The fact that the characters have to improvise makes the action fun and, at times, a bit crazy. There is a moment in this film (spoiler for a kill coming up) when Statham is about to stab a guy in the face, but instead throws him out a bus window into oncoming traffic where he is brutally killed by a speeding car. It was almost as if Statham stopped and considered what the audience would rather see, then acted on impulse.

The main question, though, is who is this audience that wants to see something like that? Well, in a word: dudes. This is a movie for the guys. Just look at the poster: it’s a gun made out of other guns. That’s not to say women won’t like it. Plenty of ladies out there dig action flicks, but it’s not crazy to assume that this isn’t a movie aimed at both sexes. For example, the only female characters in the film are only there for sex scenes set to rock music and one of these scenes takes place against a dumpster. The sex scenes were a bit too blatant of a way to pander to a male audience, though.

The testosterone is in the casting, as well. Jason Statham is the go-to man’s man actor these days. He does a decent job here. Statham is always convincing as the professional with all the answers. The more interesting casting choice is Ben Foster, who immediately elevates every film he is in. Never one to play a regular Joe, Foster gets to portray a slightly unbalanced young man with a desire to kill. He works well with Statham and adds an element of fun to the film.

The leads are very well cast and they make the film an overall enjoyable experience. This isn’t a compelling film or anything, though. The dynamic between the two characters doesn’t achieve a proper payoff. The ending was just, well, stupid, and made everything that happened before it kind of pointless. Thankfully, The Mechanic is not a plot-driven film. This is an action movie, pure and simple.

The story didn’t come to a logical conclusion, but it didn’t take away much from the film. The Mechanic is forgettable fun. This is a movie in which lengthy shootouts and car chases happen in the downtown area of a major city and the police never show up. Police do not exist in the world of The Mechanic. That will either leave you shaking your head at the sheer ridiculousness of it or it will have you giving the thumbs up, saying “Who needs the police in an action movie?” If you’re part of the latter group, then go check this movie out as soon as you can.

Random Thoughts (SPOILERS)
Seriously, where are the police? It's one thing to never have them show up during firefights, but what about the slew of evidence that gets left around? Are you telling me that there's no way you could track Foster to the house of the gay hit man? He was bleeding all over the place and he certainly wasn't wearing gloves. And he was seen having drinks with the guy before it happened. Did no one look into that brutal murder? Once again, this did not tuin the movie for me (or even really diminish my opinion of it), but wow, what are the police doing in this city?
The ending is stupid, plain and simple. In the original, both men die, and rightfully so. In this film, Bishop lives. Why? Because it's Jason freakin' Statham? Does this guy have a "can't be killed" clause in his contract or something? I'm not sure he's died in any of his films (I think Jet Li may have killed him in War, but aside from that...). There is really no reason for him to live in this film. He was duped into killing his friend and mentor and had seemingly accepted the fact that Steve was going to kill him to avange his father. Then he does this ridiculous monkey roll out of his truck before it blows up. All for what: to set up a weak call back to a Latin inscription on a gun? By the way, that call back would've worked even with Bishop's death. Pointless, pointless, pointless. This is just Hollywood saying we need to keep someone alive at the end, and it might as well be the more bankable star. Were they hoping for a sequel? Statham returns to train another new prospect, only to kill him? Sounds like a franchise to me.
Note to self, write a new article: Jason Statham cannot be killed onscreen...except by Jet Li.
I enjoyed Tony Goldwyn's slightly cheesy performance, hence the over the top line quoted at the beginning of this review.
Why did Statham have to drive a boat to get to his house? He has that car there and Steve starts to take off in it at the end. Was he actually going to be able to go somewhere, or was he just going to drive laps around Bishop's property? I get the secluded aspect of it, but it still didn't add up.
Posted by Eric Harris at 6:26 PM