The economy has been the subject of quite a few movies lately, 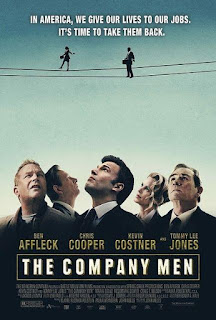 mainly documentaries. Documentaries like “Inside Job” were marketed with the promise that they would infuriate the audience. Most regular films have only used the economy as a slight plot point, aside from “Wall Street: Money Never Sleeps,” but that film lacked the focus to make much of a statement about the situation. Enter “The Company Men,” the fictional film that will probably infuriate you just as much as any documentary. “The Company Men” stands out because of its stellar cast and identifiable characters.
“The Company Men” takes a look at the effect of the financial crisis from the top to the bottom. The focus is on downsizing within a ship-building corporation. The film shows the effects from three different perspectives: the executive trying to do the right thing (Tommy Lee Jones), the young, ambitious sales manager (Ben Affleck), and the older manager (Chris Cooper). Affleck gets the most attention, as we see how a bit of wealth can lead to intense pride. Cooper’s tale is the saddest, as he is close to retirement age, but can’t afford to retire. And Jones is the one questioning all of the elaborate spending and telling everyone that what they are doing is wrong.
It is easy to root for Jones and Cooper because both actors have always been so earnest that you almost have to respect them. Affleck, on the other hand, is very hard to root for in the beginning. It’s not because he’s the clichéd corporate lackey (though that certainly doesn’t help), it’s that he is so obsessed with keeping up his wealthy appearance. How can you like a guy who still drives around a Porsche and pays his country club dues while he can’t afford his mortgage payment? Everyone around him accepts it, but he is blind…and it’s maddening to watch. In fact, the easiest person to like in Affleck’s story is his brother-in-law (Kevin Costner). Costner is a common working man and he serves as the film’s voice for the lower middle class. In other words, he gets to say all the things the audience wants to say to Affleck.
Affleck does a fine job in “The Company Men,” but Tommy Lee Jones steals the show. There has never been a better actor to play the sane man in an insane world. When he argues with his old firend/boss (a rage-inducing Craig T. Nelson), you feel his frustration. Jones is by far the most disenchanted character in the film. He has a wife who has grown very used to their lavish lifestyle (she asks if he can get her the company jet after he tells her about a bad meeting with a fired employee) and he is discovering that his voice is easier to ignore than to listen to at the office. Jones’s story is closely tied with Cooper’s. It is Cooper that propels Jones’s story arc.
“The Company Men” can easily be described as an angry and depressed movie, but it is compelling and engaging. Sure, the scene in which Nelson shows off the company’s new building, pointing out that an entire floor is going to be used for just five or six executives might have you gritting your teeth. You might want to shout support for Costner when he asks Affleck if he thinks the CEO that makes 700 times more than the common worker works 700 times harder. And if you pump your fist in agreement every time Jones talks, then that means this film has done its job.
This film may enrage you, but there is a light at the end of the film’s tunnel. The little bit of hope saves “The Company Men” from being a very nihilistic film. Ultimately, this is not a film that simply condemns corporations and businesses. The script, by writer/director John Wells, is realistic enough to not suggest bringing it all down and rebuilding it. That might sound appealing to people, but let’s face it, that is impossible. Instead, “The Company Men” wants people to expect a bit of morality from corporations or hope that there is a real person like Jones’s character: someone near the top who speaks his mind and tells people that what they are doing is wrong.
The answers this film provides may not be original, but that doesn’t matter. These answers are what the audience needs. “The Company Men” is as infuriating as a true story about corporations, but while it may raise your blood pressure, it will calm it down just a bit. If a film can affect the audience that much, then it deserves all the attention it can get.

Random Thoughts (SPOILERS)
Costner was very enjoyable in this, though he is attempting a bit of an accent. His accents have never bothered me that much, but they seem to be a spot of contention for plenty of people, so there's that. But his character is fine.
As soon as the film ended, my intial response to Affleck's resolution was negative. I wanted him to keep working with Costner and make a living as a regular worker. After thinking about it for a bit, though, it just made more sense that he would join up with Jones's new company. Also, if he would have stayed a worker, the ending would be far too much like "Office Space."
Eamonn Walker was enjoyable as a fellow fired worker opposite Affleck.
I didn't think it was all that necessary to have Jones involved in an affair with Maria Bello, but I can respect the tension it was meant to add to some of the downsizing scenes. It made the film a bit too busy at times, since so many characters and problems are being followed. But it wasn't detrimental to the film as a whole.
Posted by Eric Harris at 1:06 PM